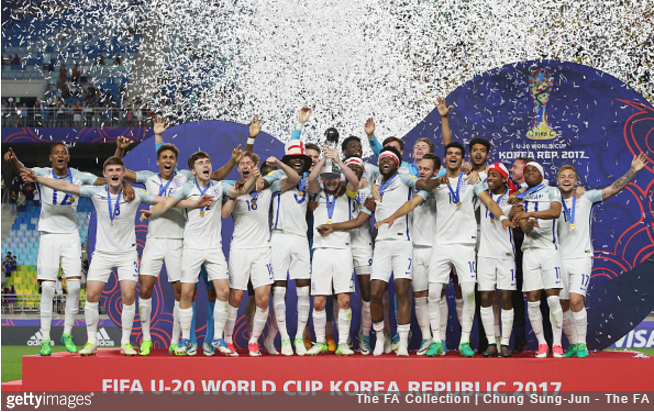 Behold, the rare sight of an England team with a trophy hoisted above their heads

England’s Under-20 squad have achieved what their senior contemporaries have failed to do since 1966 and won a World Cup after beating Venezuela 1-0.

The Young Lions stormed to victory courtesy of Everton’s Dominic Calvert-Lewin, who managed the only goal in a tense game at the Suwon World Cup Stadium in South Korea.

At the other end, Venezuela also struck Freddie Woodman’s post with a massive 40-yard free-kick…

The young Newcastle goalkeeper then stopped hearts leaping out of mouths with a fine penalty save from Adalberto Penaranda on 76 minutes.

However, Paul Simpson’s boys eventually managed to hold their nerve and cling on to the narrowest of results to secure their place in football history.

England had cut a swathe through the likes of Mexico and Argentina to get to the final, while Venezuela overcame a tricky Uruguayan side on penalties in the semi-final.

England’s progress in the tournament will have piqued the interest of fans from both the red and blue halves of Liverpool.

The Reds’ new signing Dominic Solanke hit it off well with fellow youngster Sheyi Ojo, while Everton’s Calvert-Lewis and Ademola Lookman provided England with the impetus to go on and win.

Indeed, FIFA have also announced that Solanke has been named player of the tournament, thus landing him the Golden Ball award for his efforts…

No doubt we’ll be hearing the words ‘golden generation’ by time Monday morning rolls around.

Let’s give these lads a little time to get their feet back on the ground first, hey?