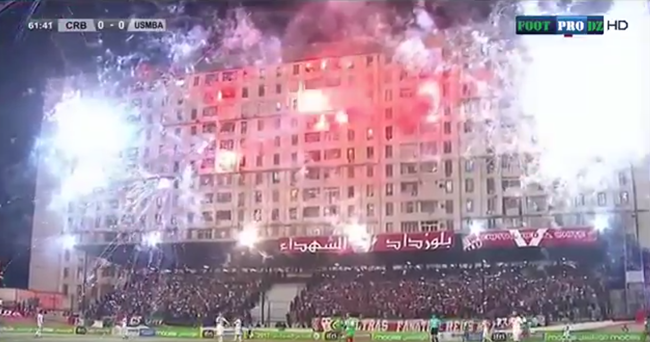 To say the atmosphere was raucous during the Algerian Cup tie between CR Belouzidad and USM Bel Abbes on Monday night is to do it a major disservice.

Indeed, the two sides played out a thrilling 0-0 draw amid a cacophonous din as fans chanted in unison and an entire barrage of fireworks and pyrotechnics were released from the tower block overlooking the stadium, illuminating the pitch in showers of red and green sparks…

“This is football in #Algeria“, Al Kass commentator raves about the atmosphere during yesterday’s Algerian Cup match between CRB & USMBA pic.twitter.com/Hntu8IWYbP

The Al Kass commentator on duty was left to watch on in awe, likening the scenes to El Bombonera (Boca Juniors) and El Monumental (River Plate) as the incredible light show fizzed and crackled in front of his eyes.