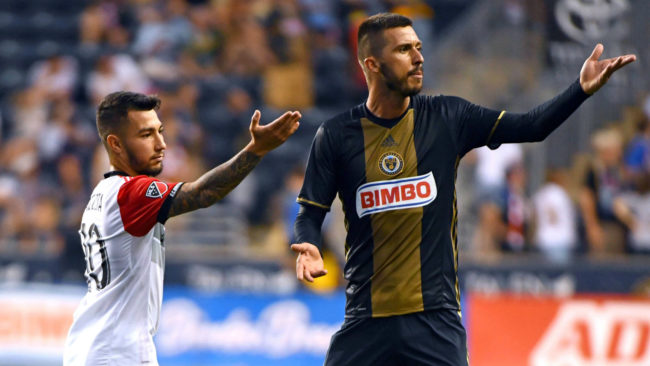 In a rather uncommon show of honesty, a red card was rescinded during DC United’s MLS clash with Philadelphia Union after opposition players defended the actions of the sent off player.

The heart-warming incident happened in the second-half of the game, when DC United’s Luciano Acosta was given a straight red after a tangle with Haris Medunjanin on the sideline.

With both players battling for the ball, ref Sorin Stoica blew for a foul after Medunjanin fell to the ground. Stoica then reached for his pocket before very harshly brandishing a straight red for a stunned Acosta.

However, a surprised Medunjanin stepped in and explained to the official that the challenge hadn’t warranted a red.

Speaking after the game, the honest Medunjanin said:

I went to the referee and he said ‘He kicked you’ and I said ‘I don’t think he kicked me, I think it was just a push’. So it was no red card for me.

After talking to the Philadelphia Union player, the ref changed his mind and decided not only to rescind the red card, but not even show Acosta a yellow.

What a nice thing to see! Although should the referee change his mind on instruction from a player?

Medunjanin’s side would ultimately win the game 1-0, although one wonders what his coach would’ve said had they lost!