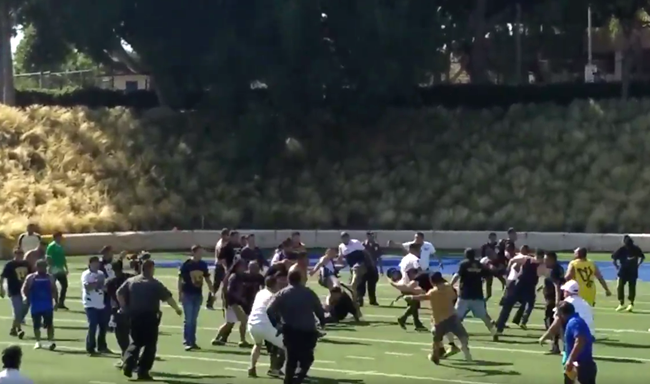 A mass brawl between supporters put paid to a legends game out in California in an incident that seriously stretched the meaning of the word “friendly”.

In a contest designed to raise awareness, support and a little cash for the United Soccer Talents Foundation, heavyweight Mexican teams Club America and Pumas staged an exhibition match that soon descended into something Vince McMahon and his oily boys would be proud of.

Already stoked by years of intense rivalry, the California sun and (we’re guessing) no small share of alcohol, up to 50 supporters from both sides cascaded onto the pitch after the first half and forced the game to be abandoned with Club America holding a 2-1 lead…

The game featured several well known South American footballers including former Mexico internationals Luis Roberto ‘Zague’ Alves and Alberto Garcia Aspe, alongside Paraguay’s Salvador Cabanas (of ‘bullet in the head‘ fame), Chile’s Fabian Estay and Colombia’s Andres Chitiva – all of whom were forced to flee from the pitch.

When the police did eventually arrive on the scene, five supporters were arrested while one was found unconscious on the ground.