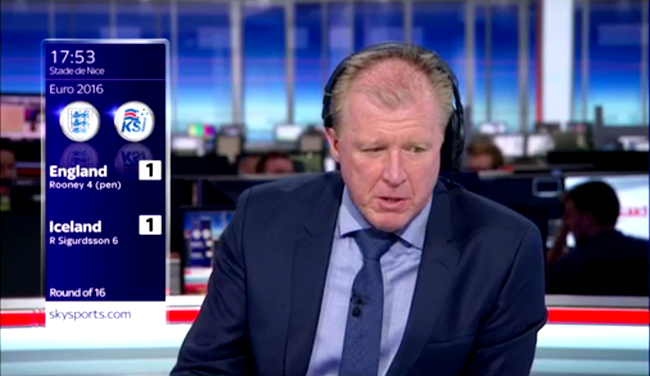 Today marks the one-year anniversary of what just might be the absolute nadir of the England national team in a decade or so positively crammed full of them.

We are of course talking about the Three Lions’ moribund, gutless, and utterly galling performance against Iceland at the last 16 stage of Euro 2016.

Despite the game being aired for free on a terrestrial channel, Sky Sports felt the need to provide concurrent coverage that mercifully spared viewers from actually having to watch the tripe being produced in Nice’s Allianz Riviera stadium.

Steve McClaren was invited into the studio to add his expert two-penneth and, inevitably, ended up making himself look like a right dilbert in front of everybody.

All together now: “The only thing they’ve got is the big boy up front, Sigurdsson, who really… Sigthorsson… Oh…”

Iceland – full-blooded, resolute and coached by a part-time dentist – cantered to a 2-1 victory.

England, and feel free to stop us if you’ve heard this one before, choked and fell ashamedly flaccid amid a stagnant miasma of mediocrity and hubris.

Here are the full highlights of the game, should you wish to submit yourself to some self-flagellation of the sporting variety…