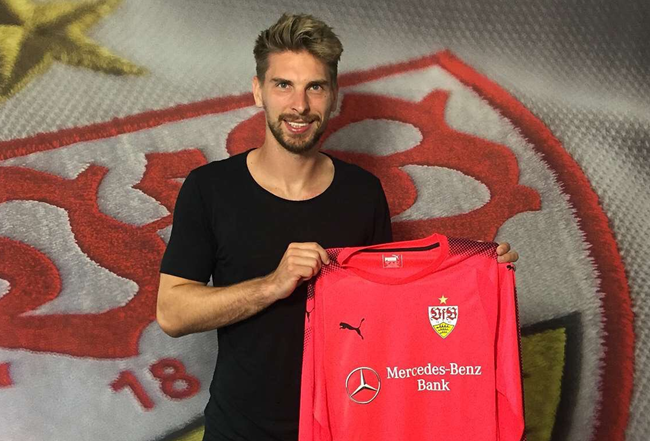 Having tossed off a season playing deputy to Kasper Schmeichel at Leicester City, goalkeeper Ron-Robert Zieler moved back to the Bundesliga on Tuesday of this week, signing for newly-promoted VfB Stuttgart.

Stuttgart put their new stopper to work straight away the following day, bringing him on for the second-half of their pre-season friendly against second-tier Dynamo Dresden.

A smidgen over five minutes into his debut, Zieler had the misfortune of conceding his first goal.

However, this wasn’t just any goal. Oh no, this was an almighty, wind-assisted hit-and-hope from the bloody half-way line…

“He (Zieler) will certainly not be pleased about that goal,” Stuttgart coach Hannes Wolf told Kicker after the final whistle.

“It was a very wild game. Overall, he made a good impression.”

Alas, Zieler promptly went on to concede his second goal shortly thereafter, as VfB lost 2-1 to their second-tier opponents.

We believe the appropriate German phrase is ‘Feuertaufe’.