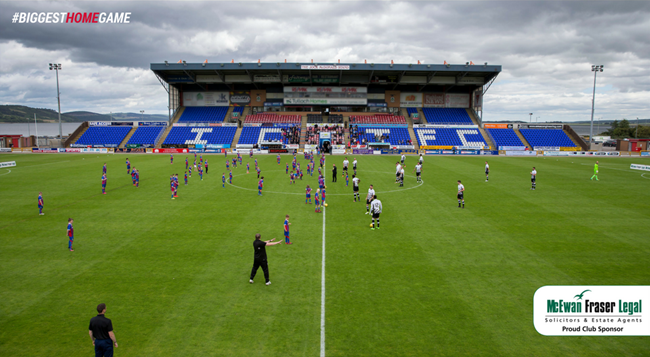 Just as Dundee did a day or so ago, Inverness Caledonian Thistle kicked off their pre-season itinerary with a novelty fixture against 100 local kids.

Alas, Caley’s first XI suffered an embarrassing defeat against the throng of young opponents, conceding an avalanche of goals in a 20-5 drubbing.

Stoic as ever, manager John Robertson mustered the strength to face the cameras after the final whistle and give a brilliantly matter-of-fact post-match interview…

📺 @ICTFC boss John Robertson reflects on his side’s heavy defeat in the @McEwanFraser #BiggestHomeGame. He admits he got his tactics wrong. pic.twitter.com/E0FQhEwcyz

In wonderfully deadpan fashion, Robertson praised the match-winning tactics employed by the victors while condemning his own side for not being able to match the intensity on display.

We pride ourselves on working on team shape and discipline, and today it just didn’t happen.

When you’re defending, you must show them into the wide areas – and we just allowed all 37 of their forwards to rush through the middle.

It’s unacceptable. We’re going to have to get back on the training ground tomorrow. We’ll have to prepare properly and just make sure it doesn’t happen again.

I’m sorry, but to concede 20 goals to any team is not on.

I’ve got to give credit where credit’s due. In particular, their 37 forwards were magnificent. The movement, the passing, the way they shielded each other from the ball, all 17 in front with a guy behind.

Our defenders just couldn’t get near them.

Lovely stuff, and without the slightest hint of being patronising. Robertson obviously retains full respect for his opponents.

Here are the match highlights and, as you might imagine, it all got a little bit chaotic…

📺 Watch behind the scenes coverage as @ICTFC are hammered 20-5 by the Caley Thistle kids in the @McEwanFraser #BiggestHomeGame. ⚽ PLEASE RT! pic.twitter.com/QKfZzVg5pV