The View From Day One.

In its heyday, Prague’s Strahov Stadium allegedly boasted a maximum capacity of anywhere from 220,000 to 300,000 once ram-packed to the rafters.

Opened to the public in 1926 and expanded through subsequent decades and various political regimes, Strahov came to represent the rise and fall of communism in the Czech Republic: a once proud, motivating force left to rot and crumble under the pressure of time, weather and the shifting quicksand of public favour.

Even today the Strahov stands as a distilled bastion of the Czech nation. An oft-glossed-over country which boasts ideas and infrastructure of real beauty and poise.

Having hitched a ride on the Burnley team bus from hotel to ground, the first sight of the Strahov is awe-inspiring as it sneaks up on you at the terminus of a narrow, twisting entry road.

The old, derelict Communist era stadium has been revamped with a smaller number of pitches now inside the grounds. pic.twitter.com/0PbFwEmX1y

The internal expanse of the Strahov actually houses a state of the art Academy run by Sparta Prague, the city’s most successful team.

It’s here that the next generation of the Czech Republic’s brightest and best are put through their paces.

Long corridors, bright yellow walls, streams of eager children kitted up and ready to play, the Academy is quietly proving itself to be an emergent proving ground for tomorrow’s talent.

Meanwhile there’s a state or the art and very yellow complex and media centre smack in the middle. pic.twitter.com/sW73CNnhdT

If your intrepid reporter didn’t already feel old and decrepit enough as it is, the CEE Cup is a stark lesson in taking your chances, literally and figuratively.

As the cream of the Premier League’s youthful Under-19 crop took on contemporaries from Canada and Eastern Europe, a batch of even younger players were being whipped into shape by Sparta’s coaches over on the far side of the stadium.

If only I’d spent more time studiously kicking a ball against a wall in the street things might have been different. C’est la vie.

Day one of the CEE Cup was nothing short of a resounding success bolstered by incredible weather, great football and a real sense of being afforded a glimpse into the future of the sport.

Sampling the local delicacies. Beats a pie frozen in the middle for sure. pic.twitter.com/Sw2lsC5MAB

Burnley kicked off the tournament’s opening fixture with a taxing encounter against heavy home favourites and winners of the last two CEE Cups tournaments, Sparta Prague.

With the escalating heat already radiating in a haze from Strahov’s old concrete terraces, you’d be forgiven for thinking the pasty Lancashire youths would suffer for it.

But somebody must have insulted the apple cart’s mother because it was well and truly upset. Burnley stole a march on Sparta with a 1-0 victory that seemed to leave even the CEE Cup’s organisers in a state of shock.

You couldn’t have asked for a better demonstration of the hunger and vitality of youth football in a hyper competitive environment than the tournament’s curtain raiser. 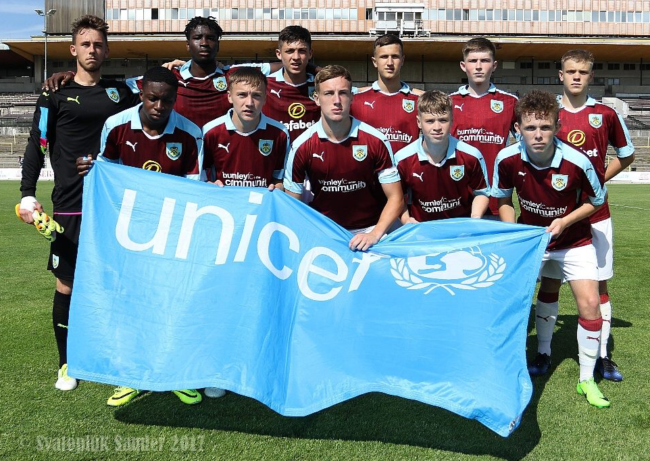 For Burnley there were heroes all over the park.

Strong Sparta pressure was consistently and persistently repelled by Clarets ‘keeper Adam Bruce, who put in a Man of the Match performance with a number of point-blank reflex saves that drew purrs of admiration from coaches, players and supporters of all extractions.

Burnley’s defensive strength carried on to their left back, Kwazinkosi Mpofu, whose speed and strength of tackle belied his diminutive stature. 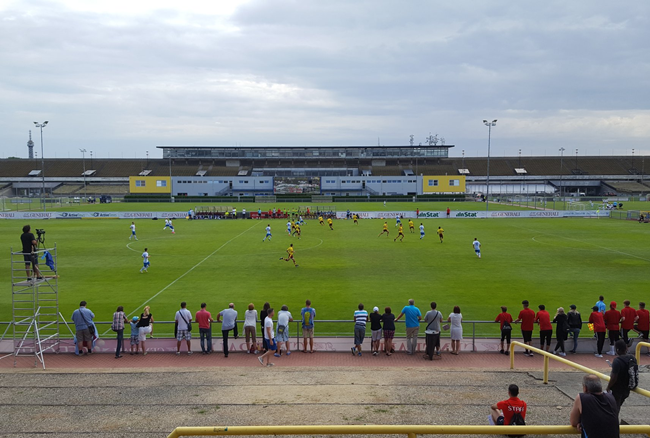 Burnley take on Sparta at the Strahov (Photo: Joseph Viney)

However, it was striker Michael Fowler who ultimately wrapped the game up for the Clarets, making up for a patchy game with a goal that would make his namesake Robbie proud.

Breaking free through the middle of Sparta’s centre half pairing, Fowler kept his cool to slot home into the bottom right corner with ten minutes remaining.

It was enough to secure the win and make Danny Cadamateri’s young side the favourites for the trophy, provided they  see off Canada’s FC ProStars on Friday morning.

Next up were Everton, who found themselves up against FC Academy Pandev, hailing from the exotic shores of Macedonia (the country is landlocked, I know – just enjoy the imagery!).

Any Blue watching in the stands or online would instantly recognise the signature hallmarks of a classic Everton display – impressive gusto applied throughout, only to come up short at the final whistle.

Despite dominating the game, the Merseysiders ended up with a goalless draw to show for their efforts courtesy of indecision, hesitant finishing and a hint of nerves. These are just young lads after all. 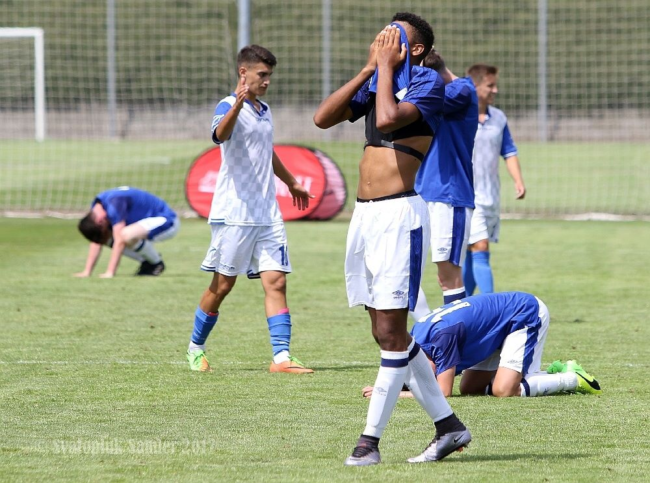 That said, they certainly looked strong at the back and easily dealt with any and all Pandev surges. Nathan Moore and Michael Collins (not the Irish revolutionary) provided a solid spine at centre half, with Tom Warren and Anthony Gordon looking nippy in midfield.

Acting as a lone striker, Joshua Zirkzee looked a decent prospect – good hold up play and obvious strength made him stand out in a game where opportunities on goal were few and far between.

Talk in the stands was that Zirkzee had only recently joined Everton from ADO Den Haag. It certainly seems as though the Toffees have uncovered a gem.

Either way, they will need to do better against Hungarian side Gyori ETO if they want to stick around.

The action then moved to the Rosickeho stadium – quite literally next door to Strahov – for the remainder of the day.

Smaller, less imposing and in much better nick than its bigger brother, Rosickeho played host to Leicester City and FC Nitra, of Solvakia.

Change of venue to the Rosickeho Stadium for Leicester City vs FC Nitra from Slovakia @cee_cup pic.twitter.com/MejQ0J2bmT

A 1-0 win for the Foxes meant that all three English teams emerged unscathed without conceding a single goal between them. Somebody get the senior national team down here for a defensive clinic sharpish.

The day’s final game saw Slavia Prague unleashed an exciting 6-0 obliteration on Romanian side Academi Sports, who made it to half-time having conceded just two goals until the floodgates opened thereafter.

And so, Day One ended with a bang rather than a whimper, six-shooters Slavia putting the rest of their peers to shame with a concise, fearsome goal glut.

The result was also one in the eye for their city slicker rivals Sparta, who succumbed to defeat in the inaugural match.  In a tournament of dark horses it’s going to be tough to pick a Black Beauty.

Phone died before the last game ended 6-0 to Slavia Prague. A great opening day’s football at the @cee_cup. Roll on tomorrow.

I am also hilariously sunburnt.

The next couple of days should see the field opening up a bit, and the football and city of Prague reveal itself more keenly.

Till then, I have after-sun to apply.