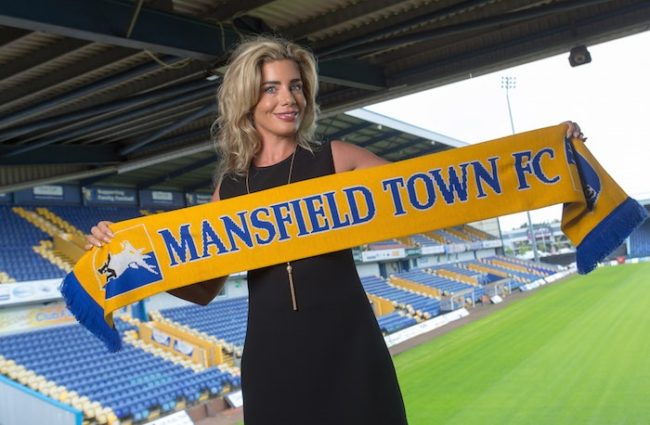 Mansfield Town chief executive Carolyn Radford has applied to represent the Football League with a seat on the FA Council.

Radford is one of five applicants bidding to land one of two available places on the council, which serves to vote and usher in policy changes within the FA itself.

To bolster her chances, the 35-year-old has accompanied her application with a lighthearted musical video, which is inspired by the ditty used by John F Kennedy in his 1960 US Presidential campaign.

Writing underneath the video, Radford lays out the basics of her candidacy and also adds a little caveat about the inclusion of a song:

My name is Carolyn Radford and I am the chief executive of Mansfield Town Football Club.

I am one of five people hoping to win one of two places to represent the EFL on the FA Council. It would be a true dream come true to be named on the council.

Just as I and the amazing team around me have developed Mansfield Town Football Club into this season’s promotion favourites, and a club likely to turn a profit this year, I’ve never done things by halves. I wouldn’t if on the council, either – it just isn’t my way.

So, I thought I’d have some fun with the council vote.

I had this video created; tongue firmly-in-cheek.

I read politics at university. While there, I learned of the tactics of John F. Kennedy – the most popular US president in the post-WW2 era, by approval rating.

My video is a direct and intentional send-up of the 1960 Kennedy presidential campaign jingle.

This be the JFK jingle in question…

We think we prefer the original, if only because it wasn’t sung by Carolyn Radford.