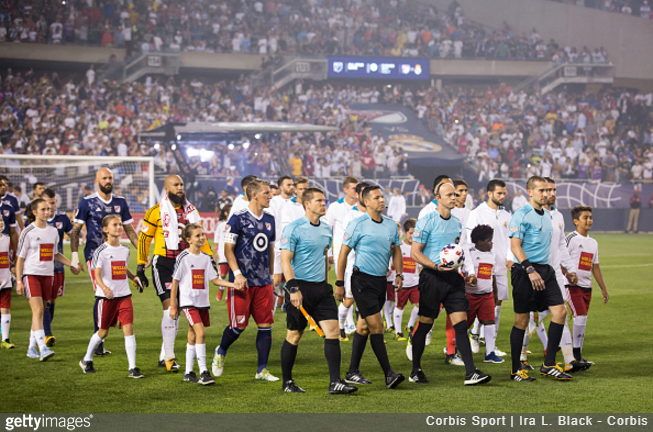 There’s every chance we’re a little late on the uptake here, but a fortnight or so ago, Real Madrid played an MLS All-Star side in the penultimate match of their pre-season schedule.

While many of us workaday proles had to make do with watching the game from a standard angle on television, the referee on duty, Mr Allen Chapman, was allowed to record the entire thing from amid the very thick of the action.

Indeed, Chapman was strapped up with a portable head-cam (as can be seen in the photo above) which produced the following close-up footage of Toni Kroos, Marcelo and Gareth Bale mixing it with the likes of David Villa, Bastian Schweinsteiger and Kaka…

Amazing stuff, and not unlike that Guy Ritchie-directed Nike advert that did the rounds a few years back.

Gives you a real sense of the actual speed and intensity at which the professional game is played, even in a meaningless exhibition.

Pies, and we suspect a fair proportion of our loyal readers, wouldn’t last five minutes!