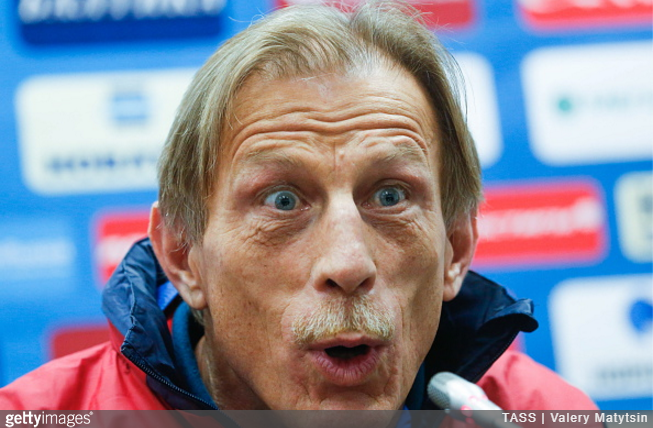 You’ll struggle to find an international coach more fiercely at odds with his national press than Romania boss Christoph Daum.

During a media conference just a couple of months ago, Daum was so enraged at the continued attempts to undermine his position that he flew into an apoplectic rage in which he claimed several times that he – a 63-year-old German man – was “more Romanian” that the entire Romanian press.

Things have been tetchy ever since, with Daum following up by scorning one of the country’s biggest sports papers, Gazeta Sporturilor, as being “only good for wrapping fish”.

Those comments led directly to the bizarre scenes that cropped up at the start of his press conference on Monday, wherein a Gazeta journalist stoked the flames further by presenting Daum with a fishing rod…

As you might expect, Daum didn’t take the obvious provocation with jovial good grace, instead barking back:

Are you starting a comedy or do you want to speak about football.

When do you start to become a sports journalist… or do you want to go somewhere else?

This has nothing do to with football, you only want to create funny stories.

Thankfully, Daum stopped short of shoving the fishing rod where the sun doesn’t shine, but something tells us the thought must have crossed his mind at least once or twice.