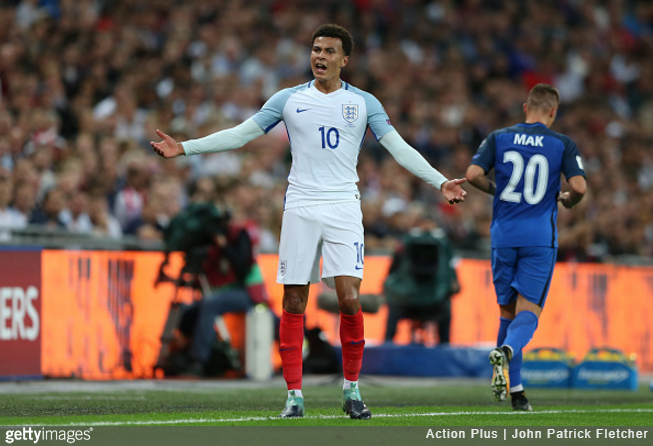 Dele Alli could be staring down the barrel of a FIFA suspension after giving somebody the middle finger during England’s 2-1 win over Slovakia at Wembley last night.

The initial suspicion was that Alli was offering the salute to referee Clement Turpin after Martin Skrtel felled the England midfielder with an agricultural challenge only for the French official to wave play on.

Is this the sequel to the Dele Alli wave? pic.twitter.com/AwfWVFI9OP

Thankfully, Gareth Southgate was on hand to clear up any confusion after the final whistle, explaining that Alli was simply engaging in a private in-joke with former Tottenham pal Kyle Walker, who was positioned just over the referee’s shoulder.

Speaking to the media after the match, Southgate trotted out the following excuse:

I’ve not seen it but I’ve been made aware of it. Kyle and Dele were mucking about, and Dele’s made a gesture towards Kyle.

I don’t know what the angle of the pitch is. The pair of them have a strange way of communicating, but that’s what they’ve said when it’s been raised.

Without seeing it, and I’ve literally just gone and asked him quickly… For me, what it does is detract from what was his best performance for us since I’ve been the manager.

His work without the ball was top drawer, intelligent positions and turning people over.

Alli then toed the party line on Twitter, reiterating that he was simply offering a friendly finger to an ex-teammate of his…

Just to clarify, the gesture tonight was a joke between me and my good friend Kyle Walker! Apologies for any offence caused! Great win 2nite

As far as we understand, if FIFA decide that Alli was indeed flipping off Mr Turpin, the maximum punishment would be a three-match ban.

FIFA are still waiting for the match reports to be filed by the officials, so we should know more – i.e. whether FIFA intend to open disciplinary proceedings – by the end of the week.