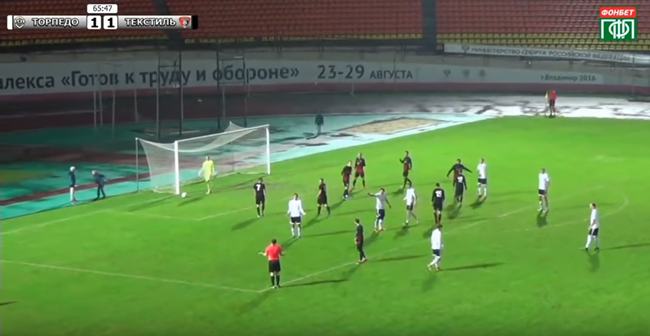 Handball in the area? No dice…

Russian commentator Vladimir Nikolsky became so enraged at seeing his team denied not one, but two blatant penalties in quick succession that he was left with no other option but to abandon his post live on air.

Nikolsky was covering the recent second-tier match between Tekstilshchik Ivanovo and Torpedo Vladimir, the team who employ him as an in-house commentator as part of Russian league broadcasting rules.

The ire really began to pique when, with the score locked a 1-1, Tekstilshchik’s goalkeeper clumsily pounced up a Torpedo striker and brought him down inside the area. The referee, Pyotr Miroshnichenko, waved away Torpedo’s fairly legitimate penalty appeals and instead awarded them a free-kick outside the box.

Just to make matters instantly worse, the resulting set-piece was then blatantly handled by a Tekstilshchik defender, only for the referee to once again turn a blind eye.

It was at this point that Nikolsky boiled over, branding the official a “disgrace to Russian football” before storming out of the gantry muttering “Now watch the football without a commentator.”

Speaking to Russian news outlet RT after the final whistle, Nikolsky had this to say:

I become emotional when I see that our team is being hurt.

I probably did overstep the line, but we are all people and we want referees and their work to be judged fairly.

There was nothing insulting in my speech. Later, I specifically revised the broadcast and I did not even use obscene words.

The most scathing phrase is “disgrace to the judiciary”. This is my point of view on the situation. It has not changed.

Torpedo have already confirmed that Nikolsky will not face any punishment for his walk-out, with Valery Puzanov, president of the club’s fan group, pledging his support for his irked brethren:

He (Nikolsky) is not just an employee of the club, but a fan like me.

If he is punished (by the authorities), the club and the fans will support him. Nikolsky did everything right.

For the record, the match itself ended 1-1.