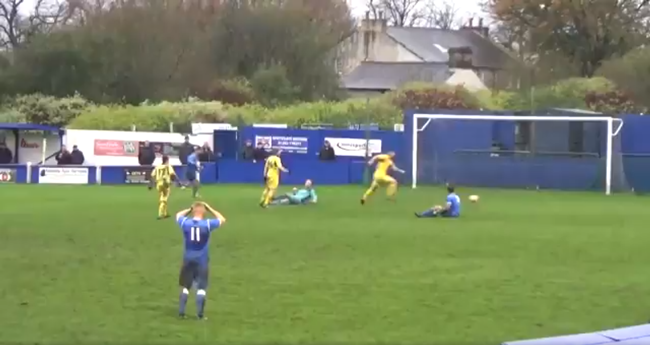 On the off chance you didn’t get to witness the amazing conclusion to Padiham FC’s frenetic 3-3 draw against Widnes FC in the Hallmark Security League First Division this weekend, then now’s your chance.

Padiham were 3-1 down going into the 92nd minute of the match, only to somehow salvage a draw via what must surely go down as the most thrilling 60 seconds of non-league football you’re ever likely to see in your lifetime…

A couple of people struggling with the link earlier – this should work now. Here’s the last minute again for those who couldn’t get the link pic.twitter.com/whVFiZGpbz

A consolation goal, an almighty hoof from kick-off, an almost perilously botched back-pass, a thwack of the crossbar at each end, a goal-line clearance, missed chances and an injury-time equaliser, all in the space of a minute or so.