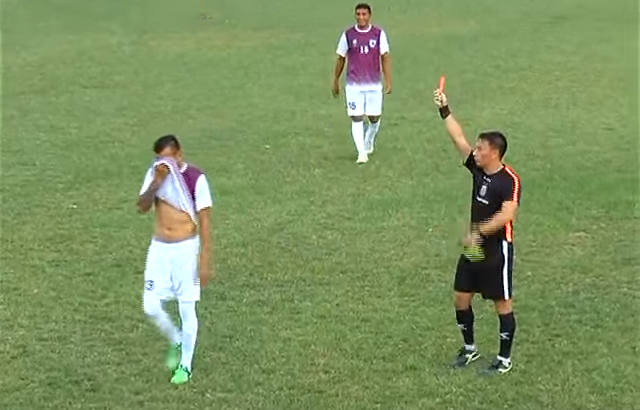 Nestor Martin Alegre may very well be the proud owner of a new world record after managing to get himself sent off without touching the ball during a recent Argentinian lower league match.

Alegre entered the fray as a substitute for Madariaga against Tiro Federal last weekend, only to be shown an instant booking for entering the field of play before his teammate had left it.

The midfielder then lasted a full 10 seconds before getting sent off dissent, picking up a nigh-on immediate second yellow for complaining about his first…

Technically the record for the quickest red card in both professional and non-professional matches stands at zero seconds, with Keith Gillespie sent-off for elbowing Stephen Hunt before kick-off after coming on at half-time for Sheffield United in 2007.

In 2000, Cross Farm Park Celtic striker Lee Todd matched that feat after being sent off at the very point of kick-off for exclaiming “F**k me, that was loud!” when the referee began proceedings by blowing whistle right next to his ear. He was promptly dismissed for using foul and abusive language.

However, the official(ish) world record for the quickest professional red card from the start of a game is thought to be held by ex-Bologna defender Giuseppe Lorenzo, who took precisely 10 seconds to wallop an opponent in the face and head off back down the tunnel in 1990.