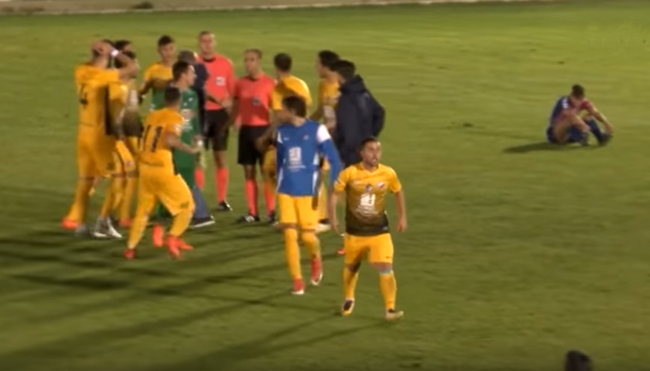 Currently mired in the Segunda B relegation zone, Ponferradina were robbed of a vital three points in the very final second of their league tie against Gimnastica Segoviana on Wednesday evening.

With the score deadlocked at 0-0 and injury time sapping away, Ponferradina midfielder Andres ‘Andy’ Rodriguez latched onto a long ball humped into the box and proceeded to chip it over the Gimnastica goalkeeper with what appeared to be the final kick of the match.

However, referee Alvaro Lopez Parra had other ideas, sounding the full-time whistle mid-dink, at some point between the ball leaving Andy’s toe and nestling in the back of the net…

As you might expect, the Ponferradina players swarmed Lopez Parra to protest his call, but the referee stuck to his guns, disallowed the goal and brought an end to what was officially logged as a goalless draw.

After the game, Lopez Parra confirmed that he blew for full-time after noticing he’d played 17 seconds beyond the allotted three minutes of stoppage time.

Though you could probably forgive him for reacting otherwise, Ponferradina coach Carlos Terrazas appeared to accept the decision with good grace:

The referee has taken this decision and we have to respect it. We all make mistakes, players, managers, and also referees.

It’s part of football and we have to respect it, because without referees we couldn’t play.

I heard the first whistle go just as I was shooting. If I had heard it before I wouldn’t have kicked the ball.

It’s something that’s never happened to me before.

We tried to tell the ref afterwards it was a goal but he said it wasn’t and he blown for the end of the match and he wasn’t going to do anything to change it.

Eh, that’s just how it goes sometimes: You win some, you lose some, you draw some (despite scoring a winner in the 94th minute).