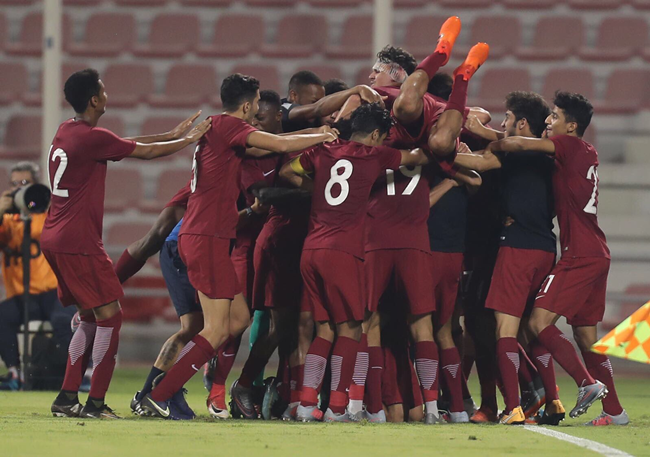 Qatar registered a narrow victory over Iran on Wednesday to secure top spot in their qualifying group and thus seal themselves a spot at next year’s AFC Under-19 Championships, though they required a penalty shootout to do so.

The match itself finished 1-1 after extra time, and Qatar thought they’d won the ensuing shootout when their goalkeeper, Shehab Mamdouh, successfully palmed away the decisive Iranian effort at 3-2.

However, the referee put an abrupt halt to the celebrations when he called play back to book Mamdouh for leaping forward off his line before the penalty was taken – the stopper’s second caution of the match.

Just as victory appeared to be slipping through their fingers, Qatar captain Nasser Abdulsalam Al Alahrak (a midfielder by trade) did the skipperly thing and put on the vacated gloves.

We think you can probably guessed what happened next…

Cometh the hour, cometh the man (with a 5-a-side-style, feet-first reflex save to die for!).

Thankfully the result wasn’t too harsh on Iran, who also qualified for the AFC Championship by finishing in second place, behind Qatar, in Group C.