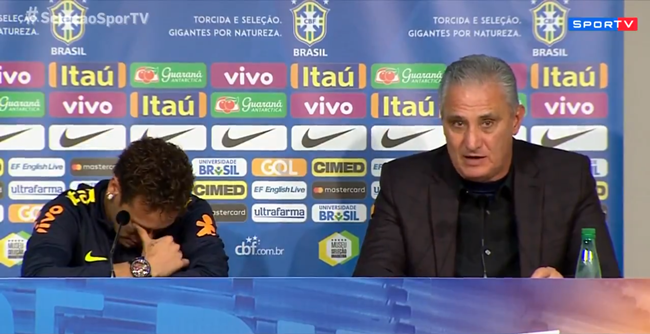 Things took a turn for the emotional shortly after Brazil comfortably saw off Japan in Friday’s tea-time international friendly kick-off.

Having opened the scoring with a 10th-minute penalty, Neymar then missed another just a few minutes later before eventually being replaced by Douglas Costa for the latter stages at Lille’s half-empty Stade Pierre-Mauroy.

To round off a funny old afternoon, Neymar then left the post-match press conference in tears after Brazil coach Tite went to bat on his behalf, praising the striker’s “big heart” amid rumours of a faltering relationship with PSG boss Unai Emery.

With Neymar visibly tearing up beside him, Tite told reporters:

People always said I had problems with Neymar. We are sick of hearing that. I can say he has personality and character.

We are not perfect, we are human beings. Sometimes we react in the wrong way. I did that in my career. But we have to be careful when we talk about people’s character and nature.

I can talk about Neymar’s character, nature, and big heart.

At which point Neymar hugged his coach, dried his eyes on his trouser leg and exited stage left.

Never a dull day with the Selecao – unless Dunga’s in charge, of course.