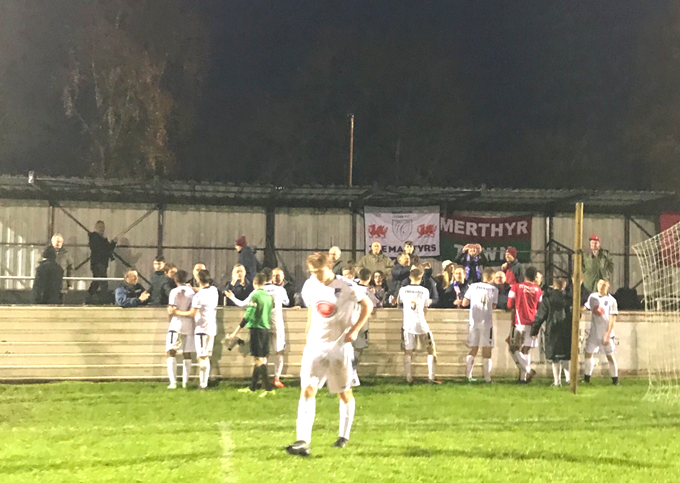 It’s not every day you see a team get trounced by double figures and still leave the pitch to a rousing ovation, but that’s exactly the fate that befell beleaguered Merthyr Town in the Evo-Stik Southern Premier League on Saturday evening.

Just days before making the 340-mile round trip to face Chesham United, Merthyr lost over three-quarters of their senior squad as the penniless Welsh side were forced to slash their operating budget with immediate effect.

As such, the Martyrs took an inexperienced youth team to Chesham, and promptly found themselves four goals down inside the first 15 minutes, then 9-0 down by half-time.

Despite conceding 13 goals by the end of play, the Man of the Match award was given to Merthyr’s 15-year-old goalkeeper Ed Hewitson, who embodied the fighting spirit on display from the away side, especially in the second half.

Honour to make my debut today and get man of the match , not the result we were looking for but a massive shoutout to the travelling fans who I can’t thank enough for the warm welcome #upthetown https://t.co/3miYONR0PU

The entire team, including Hewitson, also ran the entire length of the field to celebrate their solitary consolation goal – scored by Jacob Flower in the final few minutes – with the small band of hardy fans who made the three-hour trek to Buckinghamshire.

Regardless of the result, the match proved to be an emotional one for all concerned at Merthyr, with the club’s official Twitter account paying sincere homage after the final whistle to the young lads who had represented them so manfully.

Apologies for some of the language but important to post this. Tremendous effort by everyone pic.twitter.com/UYp2uee4FG

So proud of these players today. They were put into a terrrible situation by the club and responded magnificently and without complaint. Emotional scenes and they will always be regarded as hero’s by us all. pic.twitter.com/OC6dfulbRl

just to clarify there has been a lot said today. No player refused to play with Players offering to play for free but the manager thought it was not fair on them. Their time effort and commitment has always been to the club and they deserve nothing but praise.

Chesham were also knocked out by the boundless spirit on display, with the Generals’ live update Twitter account offering similar praise after the match.

Absolutely heartbreaking game to watch but fantastic to see the Merthyr team that played today.

On days like today, results don’t matter. Non-league football is a family that supports each other through all eventualities.

An emergency meeting of Merthyr’s owners is now scheduled to be held Monday, 20th November.

Beyond that, who knows?