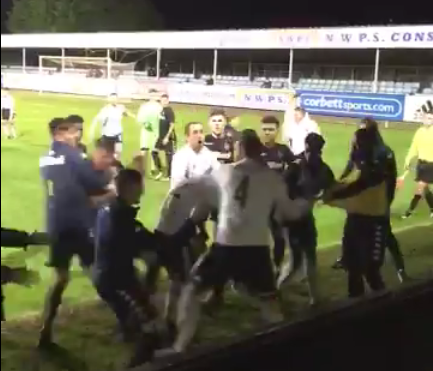 A friendly game between Leeds United’s Under-23 team and Welsh side Rhyl FC ended in ugly scenes on Tuesday night after a ridiculous brawl between the players.

The incident was apparently sparked by a late tackle by Leeds’ Bryce Hossanah. However, the Championship club were reported to be infuriated by a number of dangerous challenges by their opponents throughout the game.

What followed was a right old scrap which saw players from both sides throw a number of punches. All utterly silly…

The Leeds bench decided to then take their players off the pitch, thus ending the clash.

After the game, Rhyl released a short statement on their website…

No doubt there’ll be rather serious repercussions for all those eejits involved. It was a bloody friendly, lads!