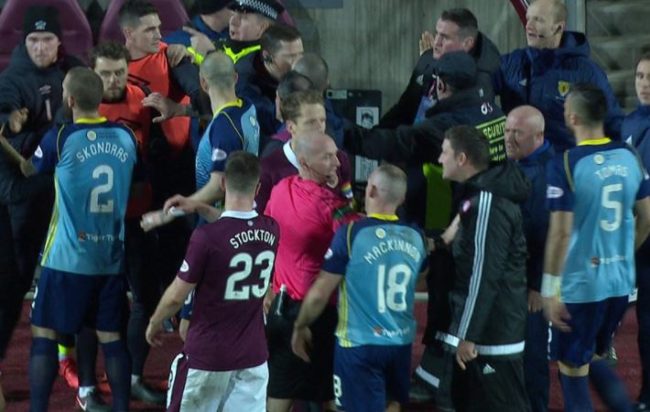 Fans at Hearts’s Scots Prem clash with Hamilton Academical at Tynecastle at the weekend witnessed an incredible touchline melee, with the police even getting in on the action.

The incident occurred in the second-half, with the game poised a 1-1. Hearts coach Austin McPhee decided to waste some time by refusing to give the ball back, a move which infuriated Hamilton midfielder Darian MacKinnon.

After attempting to wrestle the ball back, MacKinnon and McPhee both ended up on the ground, which sparked a rather ridiculous fracas involving players, coaches and even the police…

After things cooled down once again, McPhee was sent to the stands by ref Bobby Madden, following Hearts boss Craig Levein, who himself had been given his marching orders just a few minutes earlier.

What a (rather entertaining) palaver!