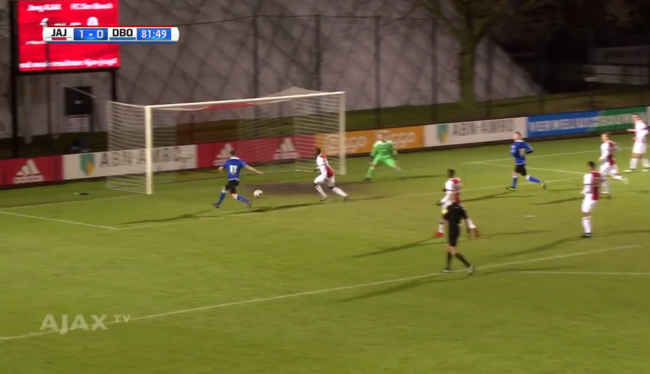 He couldn’t possibly fail to score from there, could he? (Image: Ajax TV)

The Dutch second tier (or Eerste Divisie to give it its proper name) isn’t exactly renowned for grabbing headlines the world over but Den Bosch winger Danny Verbeek did his bit to change that at the weekend.

With his side trailing 1-0 to Ajax’s second-string team, Jong Ajax, the 27-year-old was guilty of an extraordinary miss with the opposition goal gaping.

Following some neat build up play from his teammates, Verbeek was presented with the perfect opportunity to level things up just eight minutes of the game remaining.

Instead, he found a way to channel the spirit of Ajax legend Nwankwo Kanu by making a complete hash of a quick, easy tap-in…

Most defenders attempting to clear that cross probably would have ended up ponking it into the back of the net, which only serves to make Verbeek’s dire attempt that bit more astonishing.

Jong Ajax eventually saw out the win, 1-0, with Verbeek and his Den Bosch teammates no doubt ending the match in shock at what had just occurred.

That said, Den Bosch remain in the hunt for promotion and sit comfortably eighth place, the second-to-last playoff spot.