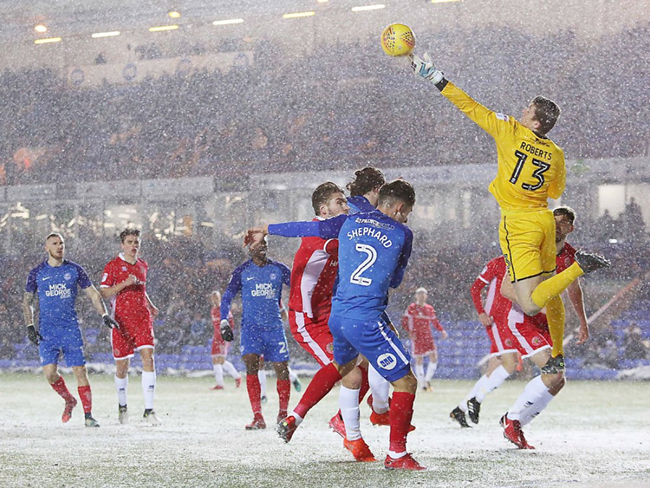 After failing to win in their previous six outings, Peterborough beat Walsall 2-1 on Tuesday night to keep themselves within a few points of the League One play-off frame.

All the more impressive is that Posh managed to do so despite London Road being enveloped by a thick blanketing of snow.

Indeed, the conditions became so inclement that the referee stopped played at one point and gave Peterborough five minutes to sufficiently clear the surface – an ultimatum that their staff and players acted upon with admirable gusto…

PHOTO 📷 | The @pyeongchang2018 Winter Olympics may have finished, but @Junior_Morias could put himself forward for the Curling event with this sweeping tekkers! Just shows the togetherness of everyone at the @ABAXStadium tonight #PETvWAL pic.twitter.com/34m0CJchbA

Steven Taylor wasn’t shy about mucking in either, the former Newcastle centre-half doing a fine job after reverting to sweeper at a moment’s notice…

“When the referee stopped play, he told us that we had five minutes to clear the lines,” said Posh manager David Oldfield after the final whistle.

“Everybody leaped into action from office staff to stewards and from ground staff to players. It showed the togetherness this football club has.”

You can’t argue with that. They could have all gone home for a nice hot cup of Ovaltine but they stuck it out, rallied and eventually earned themselves a vital victory.