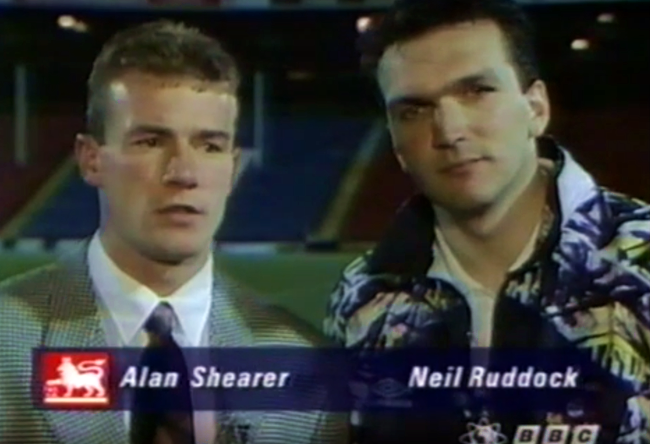 It’s little more than a morsel, but the following clip provides a nostalgic snapshot of the cusp-of-the-Premier League football landscape of the early 1990s.

Three months or so into the inaugural 1992/93 Premier League season, Tottenham beat Blackburn 2-0 at Ewood Park thanks to goals from David Howells and Teddy Sheringham.

After the match, Alan Shearer (who was only 21 at the time) joined Neil Ruddock (a fairly old-looking 24) for a post-match debrief in front of the BBC cameras.

The chat itself is fairly standard stuff, but it does feature a lovely little twist at the end…

Seeing opponents interviewed alongside side each other directly after a match seems so alien, especially in these slick, stage-managed times.

Shearer and Ruddock had previously played together at Southampton for a couple of years, both leaving in the summer of ’92 to join Rovers and Spurs respectively.

Less than a month after this interview, Shearer would snap his ACL in a match against Leeds and spend the majority of the remainder of the season sidelined.

He did still manage to nab 16 goals in 21 appearances, mind you.