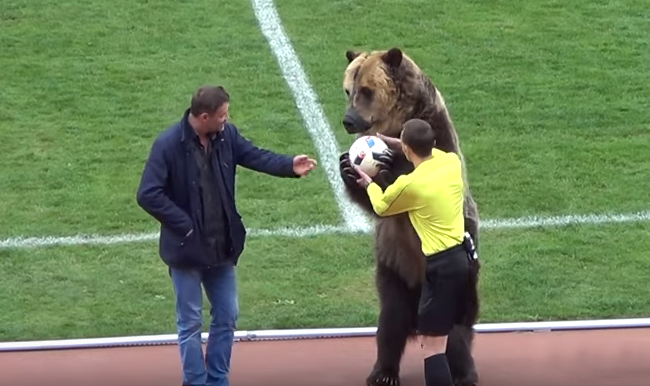 While the game may have been overshadowed by more grandiose fixtures across the continent, Saturday’s Russian Professional Football League (RPFL) schedule saw Mashuk-KMV take over FC Angusht Nazran in the big battle for 12th place.

However, the real entertainment – if you can call it that – came before a ball had been kicked in anger when a real, live brown bear was tasked with handing over the match-ball to the referee, who didn’t seem to bat an eyelid at the prospect.

While unconfirmed, it’s reported that the Russian officials responsible were using the third-tier match as a tester to see whether the bear could perform the handover as they are planning to do the same ahead of the opening match at the 2018 World Cup.

For the record, FC Angusht went on to register a credible 0-3 away victory, thus lifting them into joint-12th place in the RPFL table alongside, you guessed it, Mashuk-KMV.