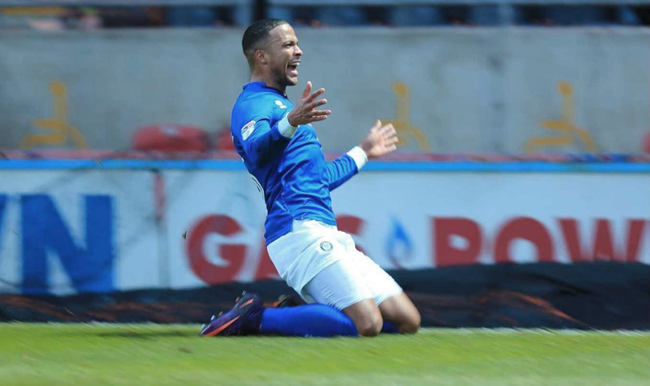 Of all the inspirational end-of-season tales to unfold this weekend, Joe Thompson’s was undoubtedly the most profound.

The Rochdale midfielder scored the goal that preserved his side’s League One, despite the club having begun the final day of the season inside the relegation zone.

With Charlton the visitors to Spotland, Thompson steered home the only goal of the game in the 69th-minute to leapfrog up and out of the bottom three by a single point come the end of play.

As well as heroically dragging Dale out of the mire, Thompson’s feat was made all the more remarkable given that he only returned to the first team scene after Christmas after going through his own personal hell, having been diagnosed with cancer twice in the space of five years.

However, he was then diagnosed with cancer again in early 2017, only to once again fight his way back to complete remission later that same year.

That’s why we call it the beautiful game! Memories are what can keep any man alive! Cherish the moments! Thank you to everyone who has supported me all my @officiallydale family 💙⚽💯💪🏽 Some things are written in the star #Believe #DareToDream #GoodNightGodBless ✨🙌🏽

Ill put it into context.!!! 9 months ago…. I could barely walk, had lost two stone! No hair after chemo and was starting my first day back at work! Thanks you to everyone associated to @officiallydale for helping me through my battle! All part of the plan hey gaffer?😂🤦🏽‍♂️ pic.twitter.com/dNnKK1p5ZQ

The morning after, now it’s all settled down. I’d like to dedicate that goal to every person who has been affected by cancer especially the ones that are going through it now! There is always a glimmer of hope! Hold on to it keep your head up and remain positive 💙🦁💪🏽 pic.twitter.com/QuhU1fqN8v

Talking to BBC Radio Manchester after the victory over Charlton, Thompson said:

You can say it’s written in the stars, fate, destiny and there’s been a lot of hard work I’ve had to do.

It’s all come down to today and it’s proven that it’s been worth it.

It’s been a rollercoaster but today’s a massive high, a massive, big moment for my family and I’m sure we’ll celebrate and enjoy it.