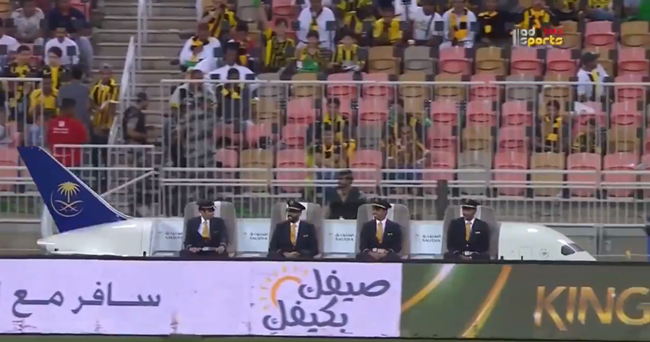 It may have taken them 120 minutes, but Al Ittihad eventually beat Al Faisaly 3-1 in extra time to win the Saudi Kings Cup in a gruelling encounter in Jeddah on Saturday evening.

However, the real entertainment didn’t come on the pitch, but rather on a specially constructed track behind the advertising boards, where a miniature plane carrying miniature pilots zipped up and down, following the ball as it went…

Saudi football is simply the most surprising scene you’ll see around. For the first time in Asia: an Airplane will follow the ball during the King’s Cup final. WTF?! 😂🇸🇦 pic.twitter.com/yksCHk29V8

It should come as no surprise to learn that the plane was a truly embarrassing marketing gimmick dreamt up by the good folks at Saudia, the Saudi Arabian national airline.

Whether or not it managed to keep the pace for the full duration of the game is anybody’s guess.