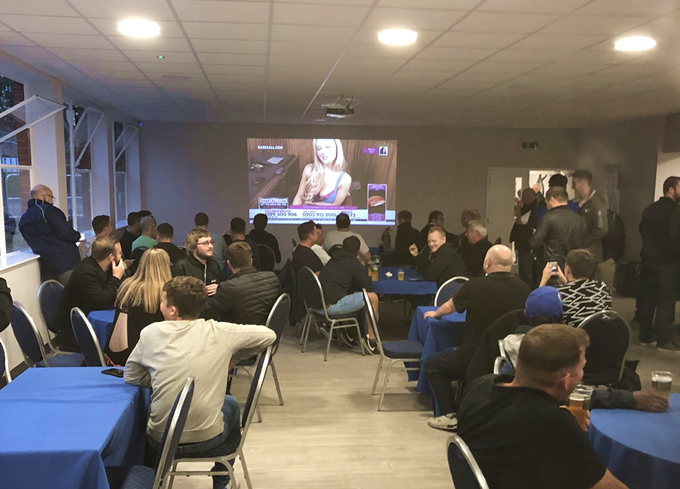 Bristol Rovers fans were treated to an altogether different kind of half-time spectacle during the Pirates’ Carabao Cup first round win over Crawley Town on Tuesday evening.

Rather than broadcasting the standard Sky Sports News coverage of the night’s games on the big screens in the ground bars, supporters were instead treated to a little X-rated action from Babestation.

It’s unclear how the TV ended up being switched over to the premium phone call-based titillation station, though the club believes an incorrigible fan may have turned up with a ‘universal remote device’ which was then used to change the channel.

Supporters were quick to showcase the incident on social media, with several videos and pictures doing the rounds on Twitter highlighting the surreal scenario…

TV screens in the west stand showing babestation. Might stay having a cider lads #UTG

i love this club pic.twitter.com/L1E36AJOCs

Someone’s put Babestation on in the new bar 😂 pic.twitter.com/xkvWmt74fc

When the footballs so bad they put babestation on at halftime at @Official_BRFC #utg pic.twitter.com/FuoU844rUX

Not everyone found it quite so funny though. Several hundred fans were exposed to adult material at the game as a result, including a lot of children.

Such was the resultant furore, Bristol Rovers issued a statement on the matter:

The club believes that someone that was attending in the bar was using a universal remote device to affect the TV output.

The matter will be fully investigated; however, the club believes that they have photographic evidence of the individual concerned and they will be dealt with appropriately.

That bloke might want to think about leaving his remote at home next time.