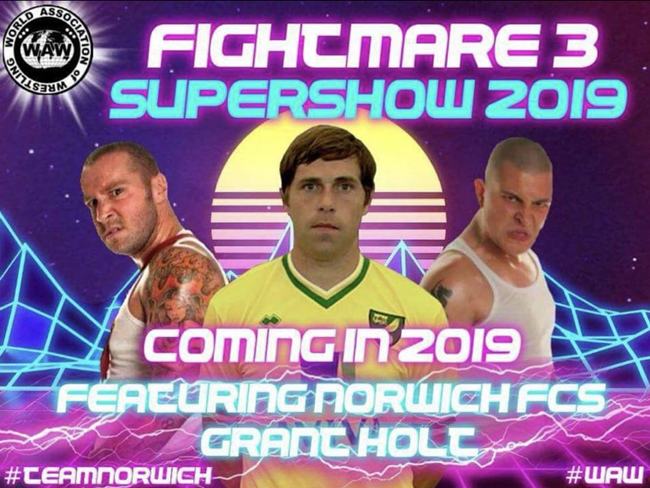 Remember not so very long ago when we mentioned that Grant Holt had signed a “multi-show contract” and was in training for a post-football career as a professional wrestler?

Well, the former Norwich striker was thrust into the ring for the very first time during World Association Wrestling UK’s 40-man ‘Royal Rumble’ main even at the weekend.

The former Norwich striker looked vaguely passable as he went through his repertoire, hitting clotheslines and body slams a-plenty in the ‘iron man’ match (i.e. the last man left standing in the ring is victorious).

As the event nearer its conclusion, he even managed to cleared a couple of competitors before being tipped over the top rope himself in what looked like a noble defeat for the ex-footballer.

However, Holt’s feet didn’t touch the ground and, thanks to a strategic assist, he was able to haul himself back in and knock his overly presumptuous rival off the turnbuckle with a flying drop-kick to seal the win…

Here he is, proudly showing off the spoils of war…

Big shout out to the trophy winner. None of other than norwich legend @Grantholt31 #Wrestling #OTBC pic.twitter.com/lnb0KRY5i0

Nice work, though Holt’s ring gear could definitely use an upgrade – unless of course his wrestling persona is “Danny Murphy on Match of the Day 2/part-time security guard at a discount shoe shop”.