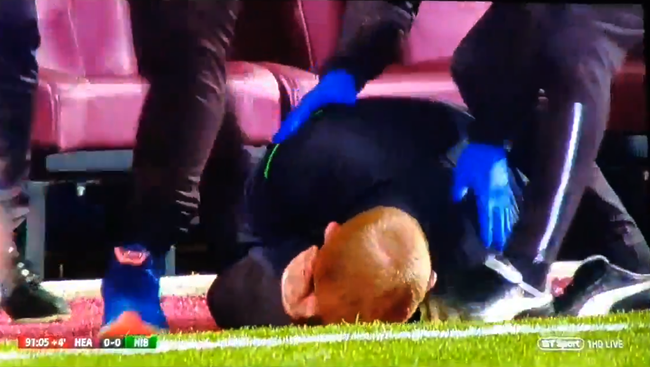 Hibernian and Hearts played out a goalless draw in the Edinburgh derby on Wednesday night, but the barren scoreline belied what was a bit of frenzied evening at Tynecastle.

Unsurprisingly, serial rustle-merchant Neil Lennon was front and centre, with the Hibs manager engaging in some arch pantomime villainy at the very end of the game.

Firstly, Hearts had a goal dramatically disallowed in 91st minute, which Lennon greeted by cupping his ears and telling the entire stadium to “shhh!”.

The next thing we know, the ginger bawbag was face down on the sidelines having apparently been struck by a coin pelted in his direction…

Speaking to BBC Scotland after the final whistle, Lennon was still incandescent with a bright pink hue:

People will say I was winding the crowd up I wasn’t. I was just giving a bit back for the abuse I was taking for 90 minutes.

But people say Neil Lennon brings it on himself, he deserves to get hit by a coin or whatever.

The guy must have a few quid because it was a pound coin. I am looking forward to him getting singled out, and if it is a lady, meeting them face to face and seeing what they have to say for themselves.

I am not having this. I have had it here before, a guy coming on to the pitch trying to attack me. It is just not on.

It (the coin) stung me; it is quite sore. I don’t know where he has thrown it from, but it is a good shot. He might get in the World Match-Play (darts) next year. It came out of nowhere. I am furious about it to be honest.

The derby produced a whopping 33 fouls, eight bookings and one red card for Hibs striker Florian Kamberi, who was dismissed shortly after the hour-mark for his part in a mass scuffle that broke out in the middle of the pitch.

Oh, and Hearts goalkeeper Zdenek Zlamal was also knocked to the floor by a Hibs fan as he attempted to retrieve a ball from behind his goal.

All in all, a fairly standard night in the Scottish Premiership.