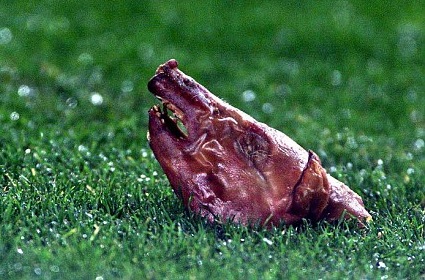 Luis Figo’s £37m move from Barcelona to arch rivals Real Madrid in the summer of 2000 didn’t go down well at the Camp Nou, of course.

So when the Portuguese winger returned there in November 2002, Barca fans were waiting to bombard their former hero with an assortment of interesting missiles. These included whiskey bottles, cigarette lighters, golf balls and, most famously, a pig’s head.

Footage of Figo under attack as he attempts to take a corner: