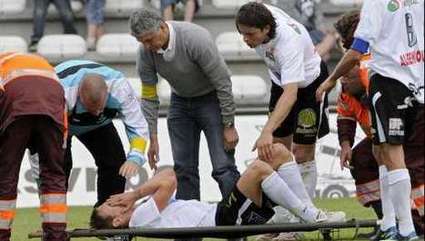 Anthony Van Loo was diagnosed with a heart condition in June 2008 but allowed by doctors and Uefa to resume his playing career, on the condition that he have a defibrilator implanted in his chest.
Thankfully, when the young Roeselare defender had a real heart attack during a Belgian league match against Royal Antwerp this weekend, the defibrilator did its job – it gave Van Loo’s heart a shock just four seconds after the attack, which probably saved the 20-year-old’s life.
Watch a video of the incident below…

It’s a real-life Crank! Can you imagine playing football but knowing that at any time you could have a heart attack? That must make it hard to concentrate on the game, surely.
I don’t know where this leaves Van Loo’s career. If I was him, I’d think twice about stepping back onto a football pitch (but then I am a pussy, whereas Van Loo clearly isn’t). Get well soon, Anthony.
[Spotted @ Off the Post]