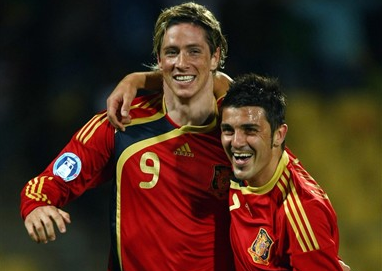 Warning: these two men can severely damage your goal difference
The Confederations Cup (come on, I know you can feign interest with me…) kicked off at the weekend. Pre-tournament favourites Spain demolished New Zealand, thanks to a Fernando Torres hat-trick, while in the other game, hosts South Africa played out a scrappy goalless draw with Iraq.
There’s no doubt that Spain are the star attractions at the CC. There’s also no doubt – in my mind, anyway – that if the World Cup was to start now, they would win at a canter. Xavi and Andres Iniesta didn’t even play against NZ, but when you have players as good as Cesc Fabregas in reserve, you know you’re dealing with a seriously strong team; Spain boasts two dazzlingly brilliant strikers, a glut of world-class midfielders, a more-than solid defence and the best goalie in the world. It’s hard to see which other nation has the weapons to beat them.

I guess the usual suspects – Brazil, Argentina, Italy, Holland, Germany, France and, ahem, England -Â could run Spain close, but I doubt it.
OK, you say, New Zealand isn’t the strongest opposition (though they ran world champs Italy very close in a friendly last week), but I was amazed at how fresh Torres and his team-mates looked. They could have won 8- or 9-0, that’s how big the gulf in class looked.
Highlights of both games below (no idea how long they’ll be up on YouTube, so catch ’em quickly):