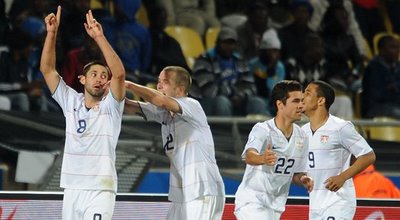 After two comprehensive defeats, the US needed a six-goal swing to reach the Confed semis. But, against Godzilla-sized odds and with a lot of help from Brazil, Bob Bradley’s team dominated a frankly pathetic Egypt to win 3-0 (it should have been more). Fulham’s Clint Dempsey scored America’s third goal, from a cross by West Ham’s Jonny Spector.
Even now, I’m not quite sure how the States – who were so outclassed against Italy and Brazil (to be fair, the US had a man sent off in both games, and unfairly too) – have reached the semis. But, it doesn’t get any easier. They now face tournament favourites Spain. If they beat the in-form European champions, that will be a genuine miracle.
Italy are on their way home, after looking like a shadow of the team that won the World Cup in 2006. If they manage to recover and win in South Africa next year, I’ll eat all of my hats. Egypt are out too, despite two fine performances against Brazil and Italy. But their performance against the US, without talisman Mo Zidan, was abject.
Highlights after the jump…