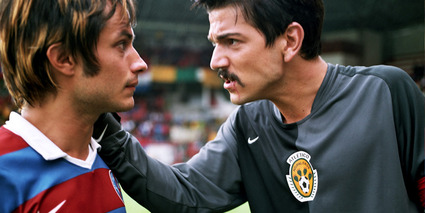 Everyone knows how difficult it is to produce a convincing movie about football; look at the Goal! 3 trailer for evidence.
But Rudo y Cursi, a new film set in Mexico, gets it right -Â by concentrating on the characters and not the action on the pitch.
The movie is a charming comedy about two brothers (their nicknames, which roughly translat as “Crude” and “Corny”, make up the film’s title) from a poor Mexican family who travel to Mexico City after being spotted by a football scout.

The film is directed by Carlos CuarÃ³n, and stars Gael GarcÃ­a Bernal and Diego Luna (who also starred in one of Mexico’s breakout movies, Y Tu Mama Tambien, which was directed by CuarÃ³n’s brother, Alfonso). The chemistry between Bernal and Luna is terrific.
Thank God there are some films out there that can deal with football in a witty and semi-realistic manner, unlike the Goal! series, which is little more than adidas-funded, head-in-the-clouds nonsense.
So go see Rudo y Cursi. It’s not the greatest movie ever made, but it’s worth a look.
Trailer below: