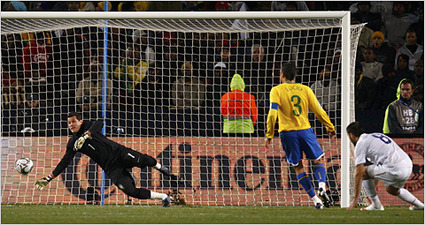 Sorry I didn’t get around to writing this up sooner, but as I mentioned a couple of days ago, Pies is currently undergoing a redesign, and so our resources have been directed elsewhere. Stick with us and I promise we’ll deliver a better Pies for all mankind.
Anyway, this was a cracking final to finish off a surprisingly enjoyable tournament. As a taster for next year’s World Cup, it was almost perfect – apart from those damned vuvuzelas, which I promise not to mention again until next year.
In the end, Brazil’s class proved too much for the undeniably plucky USA, who got so close to pulling off one of the biggest shocks in recent football history.

For American fans, I suppose it was more galling to blow a 2-0 half-time lead than score a couple of late consolation goals. But the States will take away more positives than negatives from this event, and I didn’t think I’d be saying that two matches into the group stage. As long as Bob Bradley’s side can continue to be more than the sum of its parts, and draw on the natural confidence that representing the world’s only superpower undoubtedly gives, they can compete with the best European and South American nations.
Congrats to Brazil, although I maintain that they are not a vintage Brazil, by any stretch. Indeed, on current form, I’d have to say that the four favourites for the World Cup include England, along with Spain, Germany and Brazil.
Highlights of the final below: