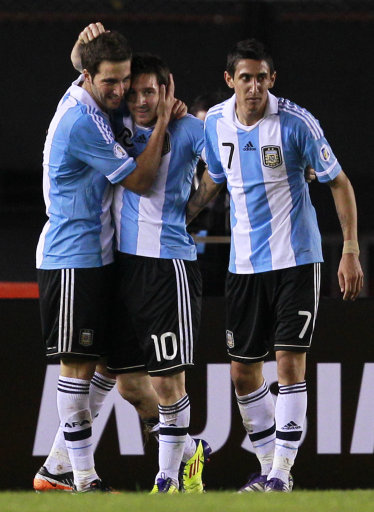 They may have made a total hash of their recent Copa America appearance, going out in the quarter-finals, but Argentina look to be getting back on track for their World Cup qualifying campaign.

The star-studded side played their first match of the campaign at the weekend, and demolished an attacking Chile side who were caught out on the break time and time again.

The Real Madrid duo of Angel Di Maria and Gonzalo Higuain linked up superbly through the game, with the latter picking up a hat-trick. Lionel Messi also chipped in with a goal, surprisingly his first for La Albiceleste in 16 games.

There was also no sign of any Madrid/Barcelona rivalry, with the likes of Di Maria, Higuain and Messi happy to give each other a kiss and a cuddle.