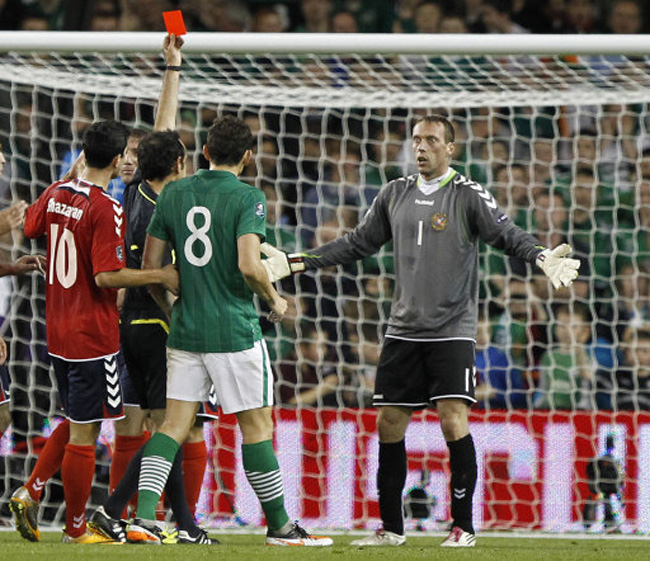 Two years after Thierry Henry’s infamous handball in France’s World Cup play-off with the Republic of Ireland, the Irish finally received some kind of footballing karma at the Aviva Stadium, courtesy of another appalling refereeing decision, this time by Spanish official Eduardo Ganzalez.

The referee sent off Armenian ‘keeper Roman Berezovsky on 26 minutes after he blocked an attempted lob by Simon Cox outside the box with his arm. However, Gonzalez and his assistants failed to spot Cox himself controlling the ball with his own arm before he tried his lob.

“It just came over my shoulder and I tried to control it,” Cox explained. “Some you get, some you don’t, but I don’t think it was a handball by the keeper.”

The Irish then profited from a dreadful own-goal, knocked in to his own net by a hapless Valeri Aleksanyan just before the break. Richard Dunne added a second on the hour and despite Henrikh Mkhitaryan getting one back for the visitors and Kevin Doyle seeing red late on, Ireland stumbled over the finishing line, making it through to the play-offs.

The FAI Chief Executive John Delaney did not release the following statement:  “Conclusive video evidence of a clear handball……. has been seen by millions of football fans worldwide. The blatantly incorrect decision by the referee to award a goal has damaged the integrity of the sport. We now call on FIFA as the world governing body for our sport to organize for this match to be replayed.”