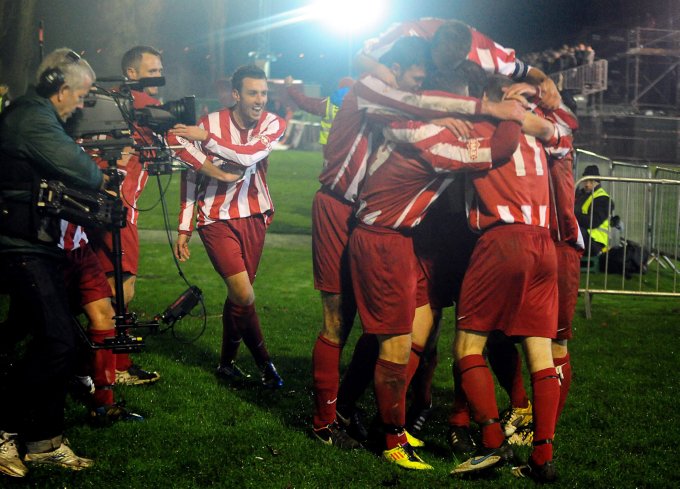 It would be remiss of us to let the day pass without mentioning that, having never been further than the first round before, Southern League Premier Division side Stourbridge beat League Two stragglers Plymouth Argyle 2-0 on their own patch last night to reach the second round of the FA Cup for the first time in the club’s history.

The first match at Home Park ended 3-3 thanks to a dramatic 88th-minute Plymouth equaliser a fortnight ago, but a goal apiece from Paul McCone and Sean Evans – who apparently scored while wearing a pair of Paul Scholes’ old boots – in the replay saw the Glassboys earn themselves a healthy £33,750 in television money and a place in the the pot for the second round draw.

And, as is par for the course with these kind of things, celebrations quickly got out of hand as innocent mascots were trampled and left belly-up in the furore…

A doff of the cap must also go to Isthmian Division One North Redbridge, the lowest-ranked team left in the competition, who celebrated a 2-1 extra-time victory over Oxford City (who happen to play in the same league as Stourbridge, the Southern League Premier Division) last night as well.

Well done boys! Have a non-specific, non-alcoholic beverage on Pies. Now, we must find out what Peter Reid did to that poor defenceless FA Cup.