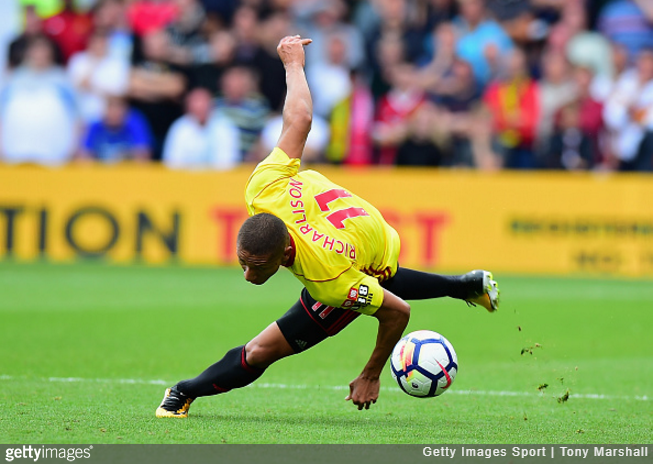 He may have only been at Watford for five minutes, but Richarlison has already become something of a fan favourite at Vicarage Road.

The 20-year-old Brazilian striker scored the winning goal against Bournemouth on his debut last month, which is always a quick and easy way of lulling supporters into taking a instant shine.

Indeed, the youngster already has his very own chant on the terraces, which is simple, to-the-point and sung to the tune of ‘La Bamba’: “Richarlison, he plays for Watford in Silva’s army!”

However, while he is most definitely aware of the existence of said chant, Richarlison – who is semi-officially being taught English by teammate Heurelho Gomes – hasn’t got the foggiest what the lyrics mean.

Nattering away to Goal.com, Richarlison admitted he’s still getting to grips with the adoration being afforded him:

The fans here are wonderful. I want to learn the song to sing it along with them.

Their affection motivates me to play even better, run a bit further. I was very surprised by their reception, I don’t have the words to describe what the fans have done for me.

I still don’t know (what the songs says), but they say my name several times.

I need to grab Gomes to try and find out exactly what the fans are singing.

The former Fluminense forward also revealed that he’s a huge fan of Elton John, which is rather handy as the revered pop behemoth also happens to be the honorary chairman of Watford Football Club.

I hope to get to know him very soon, I still haven’t had the honour. I want to give him a hug.

[Heurelho] Gomes says that Elton John always goes to games, that he likes to watch the players. He has a lot of love for the club, right?

He is a musician and has a lot of love for Watford, so it’s okay to dream about a special song in my honour. It would be interesting, who knows!

It is already a dream to be in England, in a club of Watford’s stature. I did not think twice when the offer from England came.

I want to make history in Watford, and score lots of goals. Then, who knows, go to Borussia Dortmund.

I’ve always talked about that in interviews and that’s a dream of mine that I want to fulfil.

You heard the man: Lots of goals, special song from Elton John, then off to Dortmund.