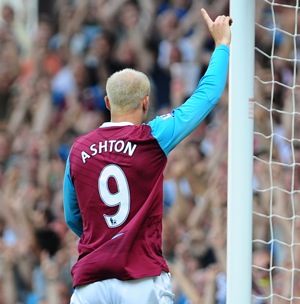 Remember when Dean Ashton was hailed as the next Alan Shearer? It wasn’t so long ago – a handful of seasons, no more.

But in August 2006, Ashton broke his ankle during an England training session. He missed all of the 2006-07 season but did return the following season to play 30-odd games for West Ham. In May 2008 he made his delayed England debut, in a friendly against Trinidad & Tobago. Despite these encouraging signs, he never fully recovered from the injury.

Even without medical advice telling him to call it a day, Ashton must have known in his heart – felt in his body – that he would never be the same player and so today he announced his retirement from professional football, at the tender age of 26.

In his first half season for the Hammers (the second half of the 2005-06 campaign), Ashton looked brilliant, good enough for pundits to talk up his England chances. He was never blessed with natural pace, but his intelligent movement, poise on the ball and ruthless finishing made up for that. Dario Gradi, who schooled Ashton at Crewe Alexandra, said today that Dean was the best finisher he had ever worked with: “He always knew where the net was, picked his spot.”

In football terms, this is a very sad story. Some of you might say, well, Ashton will have earned more than enough to enjoy a comfortable living – but that’s not the point; the point is, he has been forced to stop doing the thing he loves, the thing he is very, very good at. I wouldn’t wish that on anyone, especially not in their mid-twenties.

I wish Deano all the best.

Enjoy this selection of photos from Ashton’s all-too-brief career: Crewe Alexandra's Dean Ashton gets away from Watford's Robert Page in 2001.