Judging from the starting 11 West Ham boss Slaven Bilic put out against Astra Girugiu on Thursday evening, it was clear where the Hammers’ boss priorities lay. 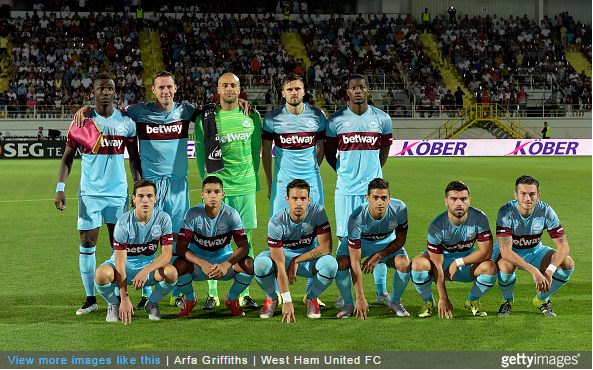 Of the club’s regular players, only Kevin Nolan, Carl Jenkinson and Modibo Maiga made the 11 in Romania. Following the 2-2 draw in the first leg at the Boleyn Ground, Bilic was obviously more focused on his side’s Premier League opener at Arsenal on Sunday.

On the night, Astra were the better side, with a quick-fire brace from captain Constantin Budescu cancelling out debutant Manuel Lanzini’s early opener for the visitors.

The game ended in a 2-1 win for the hosts, much to the obvious delight of coach Marius Sumudica (see above). The win sees Astra progress to the play-off round courtesy of a 4-3 aggregate win…

It was a different story for Southampton, who coasted to a 2-0 win away at Vitesse Arnhem to proceed via a 5-0 aggregate score.

Strikes from Graziano Pelle (on 4 mins) and Sadio Mane (89 mins) bookended a game which saw the Saints the better side for the majority of the game.

The hosts did threaten late on but ultimately Ronald Koeman’s side well worth the victory.

They now must wait for the draw on Friday to see who’ll they’ll be squaring up to in the play-off round.