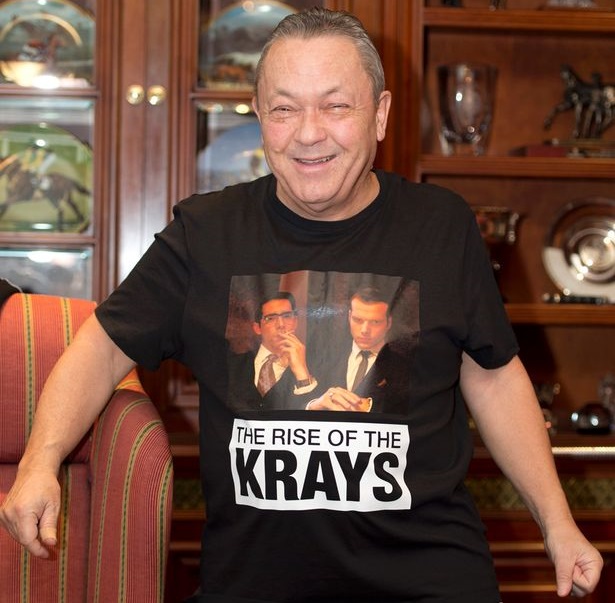 When not running roughshod over Charlie Austin’s dodgy knee ligaments, West Ham co-owner David Sullivan has been keeping himself busy of late by helping to produce a new film about 1960’s East End gangster icons Ronnie and Reggie Kray.

Financed by Sullivan and directed by Zakary Adler, ‘The Rise of the Krays’ stars brothers Ken and Sebastian Brown as the titular twins and apparently “pulls no punches” in depicting the Krays “as they really were” – y’know, like every single other movie about the Kray twins.

In fact, another Kray biopic, Brian Helgeland’s ‘Legend’, starring Tom Hardy as both Ronnie and Reggie, is currently due to come out in cinemas next month. Sullivan’s effort was given a digital release (i.e, straight to DVD) last week.

Regardless, so keen to plug his pet project is Sullivan that the film – described (by Sullivan himself, it should be noted) as “the best British Gangster movie of all time” – even got its own news segment on the official Hammers website earlier in the week.

Strangely, despite all the evidence to the contrary, The Rise of the Krays is proving fairly popular over on IMDB, with 43 users having given the movie and average rating of 8.3/10 so far.

Three of said users have even submitted written reviews, and it’s at this point that things start to look more than a little bit suspicious.

Here’s the Guardian to explain the shenanigans:

On closer inspection…it appears that something fishy may be going on.

Even the first review entitled “A fresh take on an old story” by Dee Broughton appears to have a link to Sullivan as the account was created by Debra Dods. The suspicion seems even more clear when you compare the reviews.

“I am also totally sure it will be far more authentic and realistic than the Legends movie about the Krays with Tom Hardy starring,” writes Broughton. 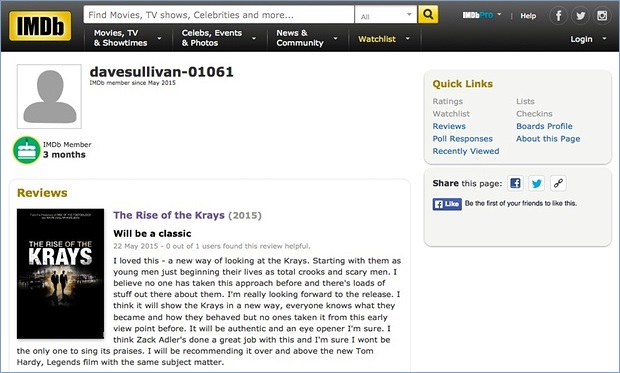 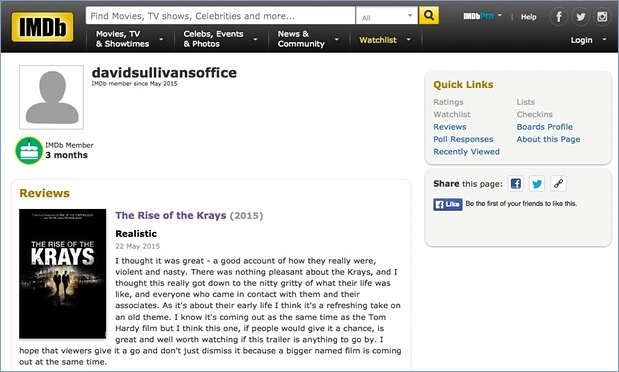 The Guardian also add that when asked to comment, Sullivan merely responded that the reviews were “nothing to do with him” and that “he did not know how to add reviews to the website”.

May we suggest they may have been the handiwork of DaveyBoyGoldWHU1936 and/or K_BradyIronLady12. 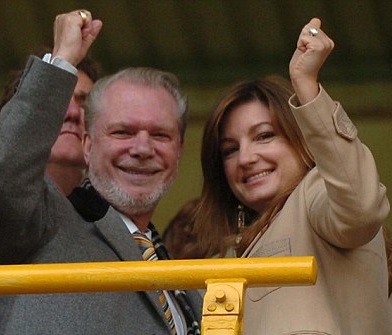