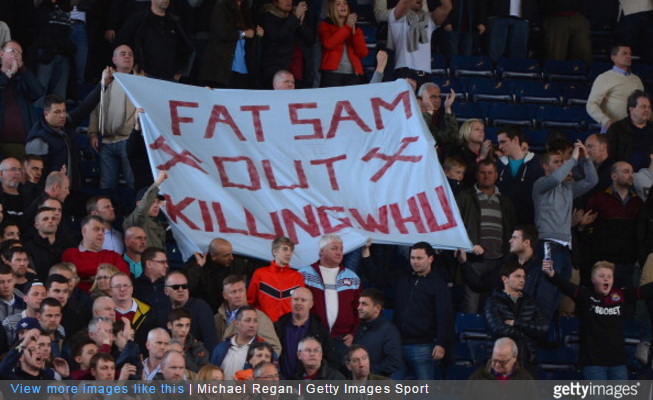 Routinely scorned during his time in charge of West Ham due to his agricultural approach to winning football matches, Sam Allardyce has hit back by accusing Hammers fans of being both “deluded” and “brainwashed”.

Allardyce, who recently took the Sunderland manager gig after being let go by West Ham at the end of last season, also added that the fabled ‘West Ham way’ of playing is now nothing but a “millstone around the club’s neck”.

The grumbling emanates from Allardyce’s new book, Big Sam: My Autobiography, which is currently being serialised in The Sun:

My long-ball label was started by Graeme Souness, who got upset whenever I beat him when he was at Blackburn or Newcastle, and was picked up by Arsène Wenger and Rafa Benítez.

As soon as I was appointed [West Ham] manager in 2011, the big debate was whether I would follow the ‘West Ham way’, which nobody could define, but, whatever it was, I apparently didn’t play it.

I felt the West Ham way was about wearing your heart on your sleeve and showing passion for the club and winning.

But the fans were being brainwashed into thinking that, historically, the club had a particular style of play which was akin to Barcelona, which was potty.

I once called the supporters deluded and I stand by that.

I don’t know who invented the West Ham way phrase, but it’s a millstone around the club’s neck.

Of course, Allardyce added that he’s not alone in having been hamstrung by the ‘West Ham way’, with several previous managers (notably all ‘proper football men’ too) also feeling the wrath of the Upton Park masses for not laying on the right kind of football.

I’ve talked to my predecessors Alan Curbishley, Alan Pardew and Harry Redknapp and they got it in the neck from the crowd as much as I did.

None of the players would admit it but they used to sit in the dressing room at half-time going: ‘Listen to them, never f**king happy, slaughtering us all the time.’

Okay Sam. It’s all everybody else’s fault again. Got it.