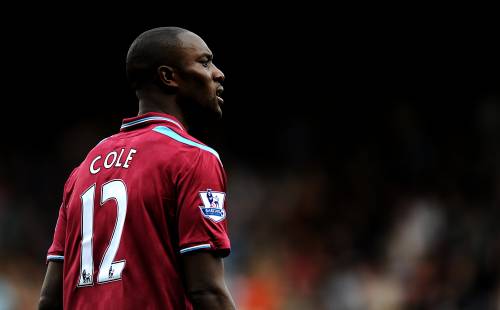 West Ham striker Carlton Cole has apologised to the Hammer’s supporters following what has proven to be a tumultuous season at Upton Park.

Despite an ownership change, financial problems and a Damocles-esque sword hanging over manager Gianfranco Zola‘s head for the best part six months, The Hammers have secured their place in the Premier League next season – a season Cole hopes will prove to be much more successful;

“We haven’t been good enough and hopefully next season we can put it right. I represent West Ham. The players and the manager will tell you, we’re all sorry things haven’t worked out the way they were supposed to this season.

But we need to regroup and start again next season and hopefully we can. We are going to do better next season, that’s the bottom line.”

The 26-year-old target man also admitted that there is only one member of the West Ham squad that can come out of this season with his head held high and his future secure;

“We all know that we haven’t been good enough this season. Scott Parker‘s been brilliant, and he’s my players’ Player of the Year, obviously he’s the fans’ favourite, so there’s no way they’re going to be looking to sell him.

But as for the rest I don’t know what’s going on. Everyone knows we’re in financial difficulties and if the right offer comes in for anybody, you can’t really turn it down.

That’s football. I think at any club in the Premier League, if someone’s offered a good amount for one of your players and you think it’s worth it, you’re going to take it.”

Cole also believes this season has been a baptism of fire for his manager, and the ordeal has made Zola a better coach as a result;

“I think (Zola’s) learnt a lot this season, about his squad and about the Premier League. Obviously, it’s his first proper, big job, and to come to West Ham is a massive ask because it’s a massive club. I think he’s handled the pressure quite well because I think we came in with a weakened squad at the beginning of the season.

We had to sell a few players we’d have liked to have kept, so he’s had to deal with the cards he’s been given, and sometimes that’s not easy for an inexperienced manager.

It does trickle down to the players and it does affect us, you can’t lie about that. It’s the same in any job. If your top man, your boss, doesn’t feel secure, then obviously it sends the wrong message out to the players, and sometimes you can see it on the pitch.

“But we are professional footballers and we did the job, just, to stay up. Now we need to push on and forget about this season. It’s a write-off.”

Nice to see Cole issue a genuine apology to the Upton Park faithful for a majorly disappointing season. I wonder if we’ll see Mido coming out and doing the same?