Declan Rice has been named as the Football Association of Ireland’s Young Player of the Year, mere weeks after the 20-year-old midfielder pledged his international future to England.

Rice will therefore be presented with his trophy at the FAI International Awards in Dublin this coming Sunday. You couldn’t script it. We can only wonder if he intends on picking it up in person.

The FAI have released a statement confirming that, as Rice was still a Republic of Ireland international at the time the vote was conducted, the West Ham youngster is considered a perfectly suitable recipient of the award. 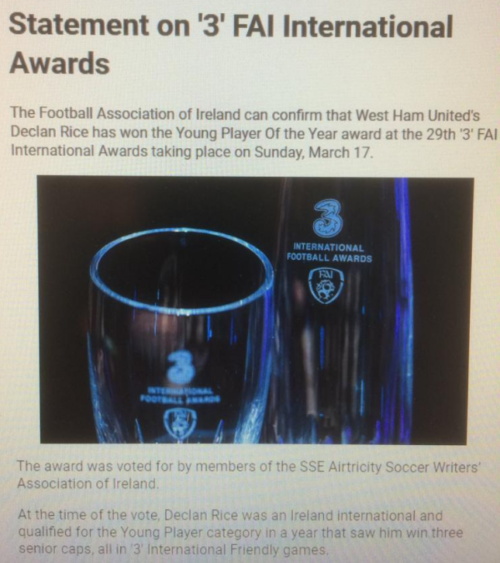 Rice qualified to play for Ireland through his grandparents and made 13 appearances for the Boys In Green, including three senior caps.

However, those three caps all came in non-competitive and/or friendly matches, meaning under FIFA rules he was still free and able to make the international switch – which he did on February 13th.

Word is that it’s highly likely Rice will be receiving his first England call-up when Gareth Southgate names his squad for the upcoming Euro 2020 qualifying double-header against the Czech Republic and Montenegro at Wembley on March 22nd and 25th respectively.