British fans show the Yanks how to do it 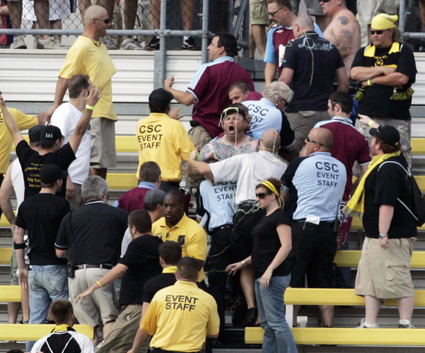 A tasty half-time scrap between more than 100 fans was the talking point of West Ham’s 3-1 win against Columbus Crew in Ohio on Sunday.
The trouble began when a small mob of Hammers, seemingly intent on flexing their muscles and also protecting England’s reputation as having some of the dumbest thugs in the world, entered the north-east corner of the stadium, where the Crew’s most vociferous supporters were located.
Columbus police officers and stadium security staff managed to separate the warring fans, using peppery spray and mace, but it’s unclear if any arrests were made.

Some friendly, eh. Makes you proud to be English. Ahem.
Columbus have some of the most raucous fans in MLS, but I think the sight of 30 tattooed yobs from England was more than they’re used to.
“We just went over for some tea and crumpets and (the Crew fans) got mad,” said a West Ham man who identified himself as Dave Simpson from London. Tongue firmly wedged in cheek there, Dave.
For the record, West Ham’s goals were scored by Dean Ashton, Kyle Reid and an own goal by the Crew’s Brad Evans.
“We wanted to show people what we’re about,” West Ham boss Alan Curbishley said after the win – a very early contender for most ironic quote of the season.
Alan, I think your fans did that for you.