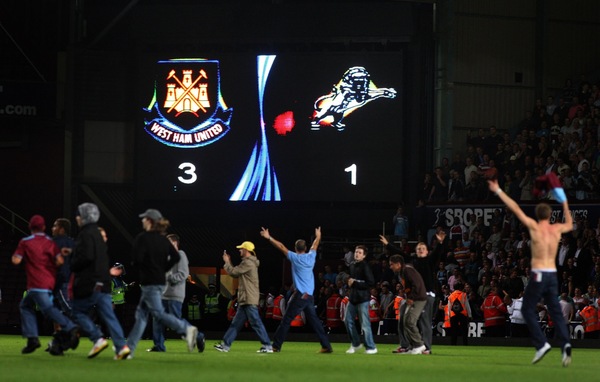 A dark evening for English football began with fighting in the Upton Park area, even before the Carling Cup tie between West Ham and Millwall had kicked off. Then came an ugly chain of events to shame English football and dredge up memories of the 1970s and 1980s, when hooliganism was a real problem: a 44-year-old man was stabbed in the chest, West Ham “fans” invaded the pitch, twice, and the night concluded with several hundred Irons gathered outside their own stadium, “chanting and bombarding police with crates and bottle”. [@ BBC]

One Millwall fan told the BBC: “It was like a war zone outside the stadium. There was fighting all round. I brought my kids with me tonight and they’ve seen some violence that is indescribable.”

Who is really surprised that this horror show should involve West Ham and Millwall? In terms of violence on the terraces and outside grounds, both clubs’ supporters have a tainted history, although Millwall’s reputation is worse than West Ham’s.

We should pray that these scenes don’t act as a trigger for more violence at football matches. The authorities in this country have done a great deal to eradicate hooliganism and I shiver to think of it creeping back into the game.

The optimist in me says this is just one of those rare flashpoint fixtures that is not representative. Before last night, West Ham and Millwall hadn’t played each other for more than four years, so I suspect this aggro had been brewing for a long time.

After the game (West Ham won 3-1, not that it matters much) Gianfranco Zola spoke for many decent football fans:
“It’s certainly not good for football. I was completely shocked. Totally. I knew it was a game that meant a lot for the two sets of supporters but I didn’t imagine it like this.

“What can I say? I’m a sport man. I love the game. I love to go on the pitch and try to make it exciting for the supporters and enjoyable for everybody to watch. This was beyond my powers.

Franco is a great man and it’s sad to hear him speak like that.

Were you at the game? Were one set of fans more to blame than the other? Do let us know how you saw it.