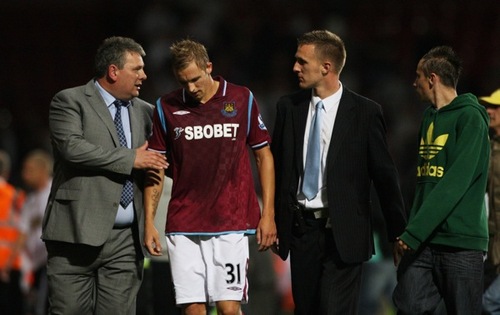 A small section of Millwall fans allegedly chanted this to Jack Collison, whose dad had died a couple of days earlier in a motorbike accident. Stay classy, you Lions.

Carlton Cole also spoke out, with some dignity, about alleged monkey chants aimed at him by Millwall supporters during Tuesday’s turbulent Carling Cup clash (clash just about covers it): “I heard it but it’s football. I don’t care. I know I’m not a monkey. I might be as strong as a gorilla but I’m not a monkey.”

There were also reports that Millwall’s Jason Price was the target of racist abuse, so you can’t say that West Ham fans – Pat Lampard, anyone? – are blameless.

I’ve written before about how black humour is a vital ingredient in British football, but this sort of stuff is not only repugnant but also depressingly familiar to anyone who has ever attended a football match in Britain between two bitter rivals.