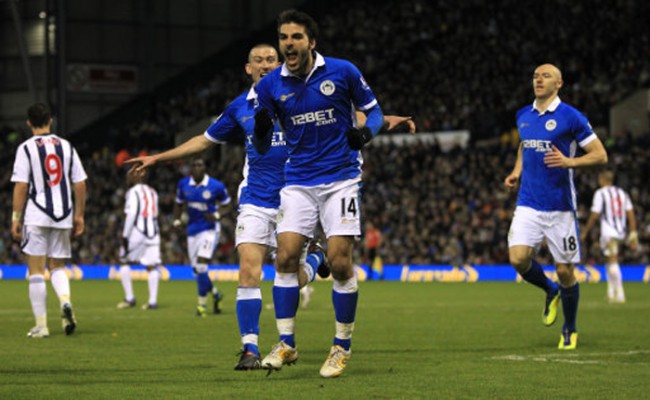 Roberto Martinez and his Wigan side made it seven points from their last four Premier League games after coming from behind to win at the Hawthorns on Saturday.

After an encouraging start from the home team, the Baggies took the lead on 33 minutes courtesy of a superb curled free-kick from Steven Reid. However, just four minutes later, Victor Moses finally bagged his first goal of the season, finding the top corner after some dodgy defending from West Brom.

Just before the hour mark, Wigan’s comeback was complete, after Moses was clipped inside the box by Reid. Jordi Gomez converted the spot-kick to put the Latics 2-1 up and despite pushing for an equaliser, the Baggies just couldn’t get that second goal. Roy Hodgson and co. will, however, be disappointed with referee Mike Dean after he failed to award a penalty for West Brom after Graham Dorrans looked to have been tripped by David Jones. Indeed, to add insult to injury, Dean booked Dorrans for diving.

So Wigan are finally out of the relegation zone (by one point), while West Brom, having won just one of their last six games, are now only four points clear of danger.